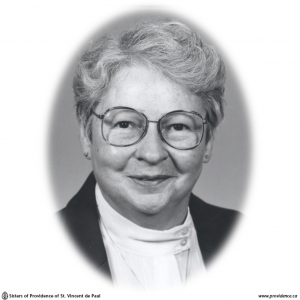 After a long and fruitful life, Sister Margaret Haughian died suddenly at Kingston General Hospital on February 11, 1999. She was eighty years old.

Sister Margaret was born in Stanleyville, Ontario, on October 13, 1918. After the death of her mother at childbirth, Margaret was adopted and raised by the Pennett family in Perth. At a later date Margaret decided to return to her family name of Haughian. Margaret entered the Congregation of the Sisters of Providence of St. Vincent de Paul August 15, 1937.

Her sister Rita, who took the name Anne Louise, later followed in Margaret’s footsteps and entered the Sisters of Providence community in 1951. Her brother Stephen, although unable to formally enter a women’s religious congregation lived many years in close proximity to his Sisters having worked in the printing room at the House of Providence for more than thirty years.

When Margaret took her first vows, she was given the name of Sister Mary Annunciata. Sister worked as a receptionist at Providence Motherhouse, Kingston and at Rosary Hall, Toronto for a couple of years. She also spent a year at the Father Dowd Memorial Home for the aged in Montreal, before coming to the business office at Providence Manor, Kingston.

Gradually, Sister updated her qualifications at McMaster University until she assumed the office of CEO at the House of Providence, later renamed, Providence Manor, Kingston. She remained in that position until her retirement twenty years later. During her long leadership at Providence Manor, Sister oversaw extensive renovations of the facility. Her main goal was always to make the home more pleasant for the residents and staff. Margaret, an energetic risk-taker who trusted in Providence, oversaw a number of innovative projects at the Manor. Among them were the Hildegarde Day Centre, a structured program for senior citizens and the Attendant Care outreach program, which serves physically challenged people in their homes. Margaret treated everyone, from board members, residents, care givers, kitchen staff and maintenance workers with dignity as all part of one family. In 1991 Sister Margaret received an Honourable Achievement Award from the City of Kingston in recognition of her immense contribution to community life. It is appropriate that a garden, a place of beauty and rest at Providence Manor was named The Haughian Garden, in honour of Margaret, who loved flowers and animals, especially her pet Shetland dog, Little Fella.

After her retirement, Sister Margaret took a Pastoral Care Course at St. Paul’s University in Ottawa and returned to Kingston to visit her beloved Providence Manor residents, as well as to minister to patients in Hospice Kingston and at Hotel Dieu Hospital. After her retirement Margaret lived in an apartment with her brother, Steve. Residents in the building remarked that they were better for having known her. Margaret’s growing frailty only served to make her more compassionate toward others who were suffering, and who drew comfort from Margaret’s strong faith and quiet presence.

At her wake, Margaret’s sisters in religion, her family and many friends, described her as a very compassionate, loving person and a leader extra-ordinaire, who took time to affirm others whenever she could.

The Mass of Christian Burial was celebrated on Saturday, February 13, 1999 by Archbishop F.J. Spence, assisted by several other members of the local clergy. Among the many good friends who attended were her honorary pall bearers, Sister Nancy Hunter, Sister Jean Higgins, Carol McKenna and Dianne Dutcher. The homily was preached by her friend, Monsignor Don Clement. He remarked upon the many times Margaret had kept vigil at the bedside of the dying and how those old friends are now welcoming her home in heaven.

Margaret is survived by her brother, Stephen Haughian, and by her sister, Sister Anne Louise, SP, both of Kingston ON. She is also survived by dear relatives in the Wilson and Pennett families. May she rest in peace.