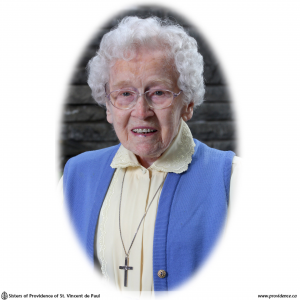 Sister Margaret McCallion of the Sisters of Providence of St. Vincent de Paul died peacefully at Providence Motherhouse, Kingston, Ontario on April 9, 2012 in the 65th year of religious life. Born on April 26, 1911 in Wishaw, Lanarkshire, Scotland, she was the seventh of eleven children of Jane Clarke and Francis McCallion. After her family came to Canada, settling near Moose Jaw, Margaret became a teacher and taught in a rural school in northern Saskatchewan for four years, then in Lethbridge, Alberta for two years. She returned to Moose Jaw where she worked at Eaton’s so that she could help take care of her aging parents.

She entered the postulancy of the Sisters of Providence of St. Vincent de Paul on September 15, 1947. When she made Profession taking the name Sister Mary Jane Frances, she returned to teaching.

Her teaching assignments included supply teaching in Arnprior, principal and teacher at St. Michael’s School, Portsmouth, St. Mary’s School, Chesterville and St. Carthagh’s School, Tweed. In 1958 she moved to the secondary schools first at St. Michael’s High School in Belleville for one year then to Nicholson Catholic College where she taught Commercial subjects, History, English and Geography until 1982. It was during these years that she exercised a deep influence on the students and had a warm relationship with both the teaching and support staff. She also served as Superior of Providence Hall from 1966 to 1978 and of St. Michael’s Convent in Belleville from 1978 to 1984.

When Sister Margaret retired in 1984 after 46 years of teaching, she took on the new challenging ministry of living with and caring for women with special needs. In 1987 she moved to the Motherhouse where she took advantage of opportunities for self-development and assisting others. In 1993 she began appraising and accessioning Providence Manor’s records for their archives and oversaw the transferring of St. Mary’s of the Lake Hospital’s archives to Providence Manor.

The Mass of Christian Burial held at Providence Motherhouse on April 13 was presided over by Most Rev. Brendan M. O’Brien, Archbishop of Kingston who also delivered the homily.