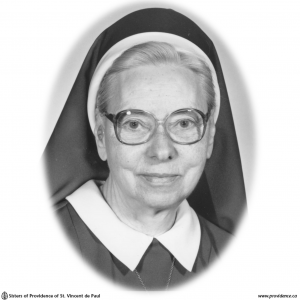 Margaret McDonald made her entry into life in a quiet country home in Glengarry, Ontario, sometimes referred to by her Scottish friends and relatives as God’s country. Because there were several McDonald families living in the area, Margaret’s family was affectionately referred to as “The Rods”. Her good parents, Roderick McDonald and Annie McDonell, possessed of deep faith and a true sense of Christian values, spared no sacrifice in the education and training of their family of nine children. Margaret was heard to remark that she never heard her parents quarrel or even speak to one another in angry tones. From her home Margaret learned to take responsibility, to find satisfaction in a task well done, and to get along with others. She also learned from her parents’ love of God and respect for God’s laws. Each day ended with the recitation of the family rosary and the litany of the Blessed Virgin. From her parents and neighbours she also inherited a love for, and loyalty to, the land of her forbears, Scotland, as well as to the land of her birth. She was proud to be a Canadian.

When the time came, Margaret’s parents generously made the sacrifice of their only two daughters who wished to dedicate their lives to God’s service within the congregation of the Sisters of Providence of St. Vincent de Paul. Margaret and her sister, Emily, as well as her brothers, John, Donald, Hugh, Angus, Ranald, Duncan and Alexander, attended high school at Maryvale Abbey in Glen Nevis, a school conducted by the Sisters of Providence, where Margaret was a boarder for four years. Margaret and her siblings all showed outstanding academic ability, and became leaders in their fields of education, science and medicine. Margaret always wanted to be able to sing. She did not succeed in developing a melodious voice, but she did take piano lessons from Sister Joan of Arc in whom she confided her desire to enter the Sisters of Providence Congregation.

When Margaret completed her studies at Maryvale Abbey she remained at home helping her mother to care for the large family for two years until she was old enough to be admitted to Ottawa Normal School. Because of this background Margaret became a very experienced cool. Many Sisters were later to benefit by her culinary skills. Upon her graduation from Normal School, Margaret taught for three years in rural schools in Glengarry. In 1930, still feeling herself called by God to religious life, Margaret said a fond goodbye to her dear family and entered the novitiate of the Sisters of Providence in Kingston. How little she thought then, that she would some day be directing the novices in this community, and would serve as its General Superior.

Following her profession of vows, Sister Margaret gained wide experience teaching in Kingston, Gananoque and Brockville, and a principal in Trenton, Apple Hill and Belleville. Then for four year the congregation availed itself of Sister’s qualities and abilities in the formation of its novices. Many Sisters today look back with gratitude on Sister’s guidance during their formation years in religious life. Father Dan McDonald, a long time pastor at Glen Nevis, had a great esteem and respect for Sister Margaret. For this reason he asked that a Providence Sister be sent to his area on a temporary basis to train Our Lady’s Missionaries, the English speaking missionary order he wished to found. At the time a Providence Sister could not be spared for this task. The Council found it hard to refuse Father’s request since he was such a good friend of Margaret and of many Sisters of the congregation.

Through the years Sister Margaret’s intellectual advancement was never neglected. Her studies were rewarded by a Bachelor of Arts degree from the University of Ottawa and a Bachelor Education degree from the University of Toronto, as well as special certificates in Guidance and Art. In 1965 Sister was elected to the General Council for a term of six years. During this period she had the privilege of studying for a year at the Divine Word Institute in London. In 1971 Sister was elected General Superior, a position she filled with the utmost dedication. As a member of the Council, Sister Margaret was privileged to visit the congregation’s missions in Peru and Guatemala on three occasions. These trips made her acutely aware of, and sensitive to the conditions existing in Latin America, and of the plight of the poor there. In a subsequent letter to her Sisters she was moved to write, “May I suggest that we examine the things we think we need and see if there are any areas where our wants could be simplified or lessened, without in any way affecting our well being or the efficacy of our apostolate.”

As General Superior, Sister Margaret represented the congregation at various formal civic functions. Indeed, in 1973, she enjoyed the opportunity of attending a dinner at Queen’s University in honour of Her Majesty, Queen Elizabeth II.

Sister Margaret was a woman of prayer. It was her trust in Providence that prompted her to accept her many responsibilities and to carry them out with courage and dedication. Never one to be idle, Sister would fill in any spare time by helping others in a variety of ways. Among some of her extra involvements was a trip from Belleville on a regular basis for several months to teach lip reading to a group of Sisters at Heathfield. She also took it upon herself to teach conversational English to a refugee family. She was a lover of good literature and a superb reader. Throughout her life, she was an outstanding leader in her alertness in recognizing things that needed doing, and her promptness, generosity and diplomacy in dealing with them. Sister Margaret possessed a dry wit which at times surprised and delighted others. At Chapter during a tense discussion on the merits of Sisters being allowed to wear slacks at time, and how they should be dressed for their wake, Sister Margaret, who was then called Mother Margaret, broke the tension by remarking that it was a long road to heaven and perhaps the Sisters should dress casually for the trip.

Sister Margaret’s sister Emily, who was three years younger than Margaret, entered the Providence community five years after Margaret. They lived together at Belleville for seventeen years. Margaret credited her sister with praying her through many frustrating situation. Indeed they supported one another in their vocational commitment to god. Emily’s death from cancer in 1985 must have been a terrible blow to Margaret, but one which she bore with her usual stoic acceptance of God’s Will.

In 1989 Sister Margaret was able to attend the 200th anniversary of the arrival of the McDonald Clan in North America. Over two hundred people joined in this celebration. Sister Margaret, who was in her eighty-first year at the time, was the oldest McDonald in attendance. Six years later, Sister’s nephew, Charles, was to make certain that his aunt’s name tag, saved from this event, and sporting some McDonald tartan was put in the coffin at her wake.

Shortly afterwards, Sister Margaret’s memory began to fail and she was to be diagnosed as having Alzheimer’s disease. No one will ever know how much suffering Margaret endured, especially at those times when she realized what was happening to her, and when we consider what an intellectual she was. Eventually, she had to take up residence in Marian II and to accept complete care by the dedicated staff there. Even ten, although she was often overly anxious and confused, Sister Margaret endeavoured to keep her gracious and genteel manner. As she advanced toward the sunset of this life, and on to the dawn of a better one, we can readily imagine God welcoming Margaret with the words, “Well done, thou good and faithful servant.”

Sister Margaret returned to her God on October 26, 1995 in the 65th year of her religious life. She was survived by four brothers, Hugh of Skokie ILL; Angus of Ancaster ON; Duncan of Freeport, Bahamas; Alexander of Menards NY; and by many nieces and nephews. Archbishop Francis J. Spence, accompanied by several priests, presided at the Funeral Liturgy in the Chapel of Mary, Mother of Compassion, Providence Motherhouse, On October 30, 1995. In his homily, Archbishop Spence referred to the faith and courage which Sr. Margaret inherited from her Scottish ancestors, a gift which she generously shared with others during her lifetime. Sister’s brothers, Alex and Angus, as well as many other relatives, were able to be present at her funeral. Sister Margaret’s Sisters in religion, Providence Associates and other friends also joined in the celebration of her life.