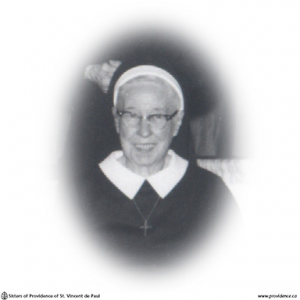 Among the notebooks kept by Sister Margaret Meraw there are many which are chock-full of recipes. As well as numerous recipes for main dishes and desserts, such as you would expect to find in the repertoire of an excellent cook, there are also some rather unusual ones. For example, you can find directions for cranberry catsup, homemade hand soup, lemon pop, English ginger beer, black salve, Spanish cream for fifty, dandelion wine, and one marked “for arthritis” along side one for furniture dressing. The most used recipe, though, was undoubtedly the following one:

A Recipe for a Happy Life

Take a large quantity of cheerfulness and let it simmer without stopping.
Put with it a brimming basinful of kindness.
Then add a full measure of thought for other people,
Mix into these a piling tablespoon of sympathy.
Flavour with essence of charity.
Stir well together and then carefully strain off any grains of selfishness.
Let the whole be served with love sauce, and fruit of the spirit.

Sister Margaret’s constant concern for others will always be remembered and her sometimes unconventional ways of bringing assistance recalled with a smile.

Mary Margaret Meraw was born on August 30, 1899. She was the fourth child in a family of nine born to Francis Meraw, a Tweed area farmer, and his good wife, Edesse Lajoie. Only the two youngest girls, Mary Helen (Mrs. William Sadler, Oshawa, Ontario) and Mary Catherine Cecilia (Mrs. Dr. John W. Latimer, Belleville, Ontario) are still living. At the time of Margaret’s birth Tweed parish was only one-year old, having been a mission of Stoco since 1884. She was baptized in the fairly new St. Carthagh’s Church. Two of the Meraw children died as infants. Margaret and the others were raised on the farm and attended a nearby one-room country school. Being the oldest girl, Margaret was her mother’s helper and was often charged with the care of the younger ones. They were typical fun-loving children. Once, when a Hornrite assembly was held in the district, Margaret dared to go for a look. Said she, “If they spot me, I got two legs. I can run!” When several of the young Meraw’s got the measles, they could not resist peeking out under the bedroom window blinds, despite their mother’s caution regarding the danger to one’s eyesight from such behaviour. Margaret’s eyes were weakened. In her innocent and earnest desire to undo the damage, she promised to enter the convent if her eyes were healed and her sight saved.

An opportunity to get to know some Sisters well came when the Tweed convent opened in 1917. For over a year, Margaret took music lessons from Sister Mary Hildegarde (Rushman). By July, 1919, she had decided to follow through on her promise to enter.  Her letter of request was written on the first of that month.

The annalist’s note regarding Margaret Meraw’s entrance on August 14 runs next to a reference to the “case”, which the court is preceding regarding Sister Mary Basil (Curran). Apparently new members were applying and being received despite the unfavourable publicity being given the Community in that period. One of those who became a Postulant on the same day was Mary Isabella Barrow (Sister Mary Carthagh). She testified that Margaret was “simple, not bold, and so the Mistress favoured her”. This simplicity was the characteristic that made her efforts to help others so unintimidated. She was able to by-pass any other rule in favour of that supreme guide, charity.

At the close of Novitiate Margaret took the name, Sister Mary Laurena, and was posted to St. Mary’s of the Lake Orphanage. From then until 1951 she served in many Eastern Ontario centres, sometimes as a cook and other times caring for the sick and aged. From every place she lived there are stories of her forthright good deeds. In Glen Nevis she once gave away all the dinner soup, and in Picton she deemed an elderly couple “to have as much right to turkey for Christmas as we have”. In Trenton she not only fed a dirty young lad who came hungry to the door, she also washed him! On their return to Trenton years later, his parents brought him back to visit her. She had practical experiences in her charitable activities – her big pockets hid many a piece of fruit for a needy visitor or a depressed patient.

Sister was posted to the Motherhouse in 1951 and often her work there was the night shift on the Infirmary floor. She was most diligent in her care of the sick. Her notes contain articles on anatomy, lists translating medical terms from Latin to English and instructions for treatment of a variety of health problems. She compensated as best she could for her lack of formal training. Her charity continued. Even an oxygen tank could be procured, if necessary – “Anything for folks like you.”

Two references have already been made here to Sister Margaret Meraw’s notebooks. Before giving an account of her final illness and death, let us return once more to this very interesting collection. Sister’s writing reveals an intense love for her family. She made God’s words hers, “I never forget my own,” and she thanked Him for “the lovely God-fearing people I have”. She kept detailed lists of the births and deaths of relatives and of the important events in their lives, so she would not forget to celebrate with them.  Her sister, Helen, recalls that with Margaret there was always “lots of room for everyone”

This love of family extended to her religious family also. She had copied community lists and names of employees in the institutions where she worked. People were a most important part of her life.

Sister’s resourcefulness and ability to make do in difficult times is shown by the fact that many of her collections of recipes and household hints are pasted on pages previously filled by some student’s notes written on the mission where she was living.

Sister Margaret’s very busy life was slowed gradually by the advancing years. Her hands became much less flexible and she had more often to allow others to serve her. However, it was not until February, 1980, that the Infirmary first recorded her as a resident. By 1981, she required a pacemaker to assist her weakening heart and, by 1983, she was confined to bed and wheelchair.

In February of 1986 Sister Margaret and several other Sisters at the Motherhouse contracted pneumonia after the winter flu. Sister’s case was complicated by congestive heart failure. It became evident that her end was near. On hearing this news someone remarked, “When she gets to heaven, she will likely be sneaking something to the Souls in Purgatory to ease their long night.” Although she had not been active for the last few years, her reputation had not faded.

For some days, a day and night watch was kept at Sister’s bedside. Then, on February 10, she gently gave her soul to the Lord, just as she had given so much to Him already.

In the Second Letter to the Corinthians we are told that Christ came so that “in Him we might become the goodness of God”. In his homily at the funeral His Grace expressed our gratitude “in being able to see so much of the goodness of God in Sister Margaret”. The expression of God’s love in the life of a kind person, he said, helps us to understand it better than we can through the written word. She truly gave us “a glimpse of the love of God”.