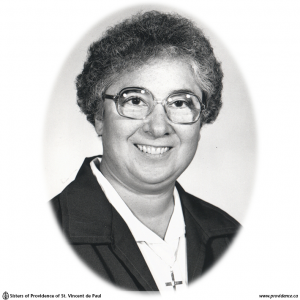 Margaret Rose was born in Alliston, Ontario on August 26, 1931, the eleventh of twelve children.

She received her early education at St. Vincent’s Academy and Notre Dame High School in Kingston. She entered the novitiate of the Sisters of Providence of St. Vincent de Paul on August 15, 1950. After making profession in 1952, she worked at the orphanage and in the altar bread department for one year. In 1953 she began her training as a nurse at St. Mary’s Hospital, Montreal, and graduated in 1956. She worked there for one year as a staff nurse in the Out Patient Department and then went to St. Mary’s Hospital, Camrose, Alberta for four years. From there she went to St. Vincent de Paul Hospital in Brockville in 1961 where she remained for ten years. During that time she worked as a Medical, Surgical Supervisor, obtained her B. Sc. In Nursing Education at the University of Ottawa and was the Director of the R.N.A. Training Centre for six of those years. One year later she went to the Infirmary at the Motherhouse as local superior. She then spent two years at Providence Manor as a Nursing Supervisor.

In 1986 she went to St. Mary’s of the Lake Hospital, in Kingston as Director of the Day Hospital and Coordinator for the Sisters there until her retirement in 1996. She then became involved in Martha’s Table as a Board Member and worked as a volunteer three days a week for 2 ½ years until she became ill. In 1999 she went to Marian I infirmary where she spent her days resting, praying and visiting the Sisters and her family.

Sister Margaret Rose was called home to her loving God on November 15, 2005.

Two weeks before her death, Sister Margaret Rose made the Constitutions Retreat. She participated fully in the retreat activities, sharing her deep awareness of God’s love for her, her love for God and her Community and family and God’s love for our congregation.

She served all with compassion and loving concern. Her commitment to high quality health care and her leadership qualities gained her great respect and love. Her priority in life was her journey of faith. She bore the burden of poor eyesight throughout her life, the cross of dialysis and a bad heart as well as other medical problems with courage, enthusiasm for life and a great trust in God.

Sister Margaret Rose is predeceased by her parents Leonard and Rose (Domenico), her sister, Angela and her brothers, Anthony, Samuel, Brother Frank Fardella, C.R. and Gerald.

She is survived by her sisters, Frances (Dwyer), Mary (Goodall) and Patricia and her brothers Gerald and Leonard.