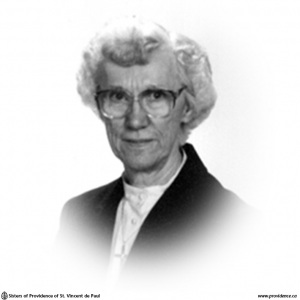 Sister Marguerite was born in Belleville on March 19, 1928, the eldest of six children, growing up with five brothers.

She attended the local public elementary school and St. Michael’s High School in Belleville. She entered the Novitiate of the Sisters of Providence on August 15, 1946. After she made first Profession she went to Toronto Teachers’ College.

In September 1949 she began her teaching ministry at St. Joseph’s School in Kingston. One year later she went to St. Carthagh’s, Tweed then to St. Francis, Smiths Falls, St. Mary’s Chesterville and St. John’s, Perth. She taught the primary grades for most of her teaching career. She took courses in Home Economics, Vocal Music, Junior Education and Religious Education. After taking a three-part course in Special Education, she taught children with special needs. After 22 years of teaching at St. John’s, Perth, she was honoured by the parish on October 2, 1983 for her devoted service.

In 1984 she retired from teaching and went to St. Mark’s Parish in Prescott as pastoral assistant. From January to May in 1985, she followed the Ministry to Ministers course in San Antonio, Texas, returning to Prescott in May.

Following this assignment, she returned to Perth to assist with the elderly Sisters in the convent. She also visited parishioners in the nursing homes and in their own homes. She was actively involved in the parish where she was a compassionate and loving presence.

In the fall of 2002 she went to Providence Manor where she once again was a loving presence to the residents she visited there until ill health necessitated her move to the Motherhouse.

Sister Marguerite was called home to her loving God on October 13, 2005.

The Mass of Christian Burial, held in the Chapel of Mary Mother of Compassion, Providence Motherhouse on October 17, 2005, was presided over by Most Reverend Francis J. Spence, assisted by several members of the clergy. Rev. Bernard O’Neill, Sister Marguerite’s brother, delivered the homily in which he paid tribute to religious congregations. He referred to the symbol of the ring on Sister Marguerite’s hand which made a statement of her years of service to God and to the Sisters of Providence.