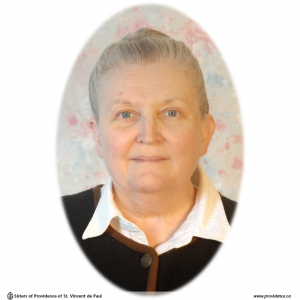 Sister Marian McCallum was born in Montreal on May 11, 1948 and attended St. Malachy’s School and Marymount High School. Following her graduation, she entered the Sisters of Providence of St. Vincent de Paul on September 8, 1965. After graduating from the Ottawa Teachers’ College in 1973, she began her teaching ministry at Sacred Heart School in Batawa, Ontario. Her ministry took her from Batawa to St. Peter’s School in Trenton, Ontario then to St. Joseph’s School in Prescott. While in Prescott she served as the recording secretary and as a board member of the Grenville County Historical Society for 2 years. In June 1979 she was awarded an Honorary Life Membership in the Society for service rendered and archival research as secretary and board member.

In 1979 she joined the staff at Nicholson Catholic College in Belleville where she taught for 18 years. During these years she taught Latin, English, French and Religious Studies as well as enrichment classes for gifted students and life skills classes for life skills students. She was co-ordinator of Pastoral Services and Communications and in 1984 became teacher advisor for the Travel Club, chaperoning several trips to the United States and abroad. Sister Marian spend the last eight years at Holy Cross Secondary School in Kingston teaching English, French and Religion including five years as Religion Department Head. She retired from teaching on January 31, 2007. In the course of her teaching career, she received her B.A. from Queen’s University (1977), her M.A. in French from Middlebury College, Middlebury, Vt. (1985) and a M.Ed. from Queen’s University (1992). She obtained a Specialist Certificate in Religious Education, an Honour Specialist in French and a Principals’ Certificate. She also obtained certificates in vocal music, guidance and special education.

Over the years, Sister’s vocal abilities were continually put to use. She was a cantor in the parishes where she lived and at St. Mary’s Cathedral for special liturgical events. She also assisted with the singing at Providence Manor’s Sunday Liturgy. Sister Marian was also a member of the Belleville Choral Society and later the Kingston Choral Society.

Sister Marian McCallum was called home to her loving God at Providence Motherhouse, Kingston, Ontario, on July 5, 2007. She is predeceased by her father, Cornelius McCallum. She is survived by her mother, Dorothy (Nowlan) McCallum, of Montreal, her sister, Janet Medlyn of St. Thomas, Ontario, and her brother, John David (Tracey) of Hudson, Quebec.

The Mass of Christian Burial, held in the Chapel of Mary Mother of Compassion, Providence Motherhouse on July 9th, was presided over by Most Rev. Francis J. Spence, Archbishop Emeritus of Kingston, accompanied by several members of the clergy. Rev. René Labelle was the homilist.