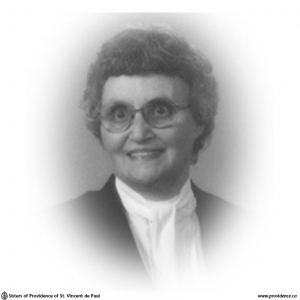 Marie Jean Estelle Dumont, born in Chauvin, Alberta, on March 29, 1922, was the only daughter of Joseph Amedee Dumont and Anastasia Jane Dwyer. She grew up on the family farm with her five brothers until drought forced them to move to Edmonton. The family then moved to St. Albert when Marie was 6 years old. Later they moved to Lac St. Anne where the family had a dairy farm. They sold milk to the Sisters for the children at St. Mary’s Orphanage. This was Marie’s first contact with the Sisters of Providence. Marie went to Edmonton for high school. After completing Grade 10, she had to go to work. She got a job with the Alberta Government in the Department of Lands and Mines as a junior draftsman. During this time Marie boarded at rosary Hall and roomed with Jean Edey. Marie had had a desire to become a Sister for some time and at this time in her life her desire to become a Sister of Providence deepened.

Marie and Jean Edey traveled together to the East in the winter of 1947, entering the Novitiate on February 2nd. They arrived in Kingston during a snowstorm and had to walk from the gate at Heathfield to the front door because the taxi was unable to drive through the deep snow.

After final profession in 1952, Sister Marie went to Daysland to take charge of the dietary department at Providence Hospital. While at Daysland, she obtained a Class 4 Engineering Alberta Government Certificate in maintaining boilers so that she could look after the boilers at the hospital. In 1963 she was assigned to St. Joseph’s vocational School where she was in charge of the dietary department.

In 1977, Sister Marie with Sister Angelica Dunn embarked on a 6-month “adventure in the north” to assist in the transition period of two northern hospitals. These two hospitals, staffed by the Grey Nuns and administered by the Archbishop, were in the process of transferring the ownership and administration to the Catholic Health Council of Saskatchewan. Since the Grey Nuns could not provide an administrator, Sister Angelica was appointed as temporary administrator. Sister Marie, as food supervisor, accompanied Sister Angelica to the northern community of Ile-a-la-Crosse. These two Sisters of Providence followed the example of St. Vincent de Paul, filling the gap where the need was great. Sister Marie returned to Moose Jaw at the end of this assignment.

In 1984 she had a well earned sabbatical in Spokane, Washington where she took the Credo Program at Gonzaga University.

Following her sabbatical she was assigned as Superior of Providence Manor in Kingston and ministered in pastoral care often sitting and praying with the dying at night.

Throughout her religious life Sister Marie took courses in addition to her engineering certificate, to become qualified as a food supervisor, a director of housekeeping and a worker in pastoral care.

She was board member of an active treatment hospital for 3 years and served on various committees in healthcare including a building committee and an infection control committee.

When Sister’s health began to fail, she took up residence at the Motherhouse. For approximately the last 4 years of her life she was a patient in the infirmary.

After a long battle with cancer, Sister Marie returned to her loving God on Sunday, March 25th. May she rest in peace.