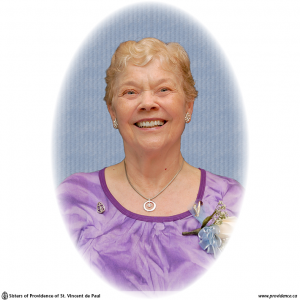 Marie Cecile Dundon was born in Gananoque, Ontario on May 2, 1935, the youngest of seven children of Leo Dundon and Irene Leader. She grew up in Brewer’s Mills, Ontario where she attended the local elementary school. When her mother became ill, Marie remained at home to care for her until her death in 1952. She remained another year at home to be with her father.

Marie entered the novitiate of the Sisters Providence of St. Vincent de Paul on September 19, 1953. Following her First Profession of Vows in 1956 she began teaching private piano lesson and school music part-time as well as being the church organist first in Arnprior then in Gananoque, Prescott, Tweed, Picton, and Napanee. From 1988 – 2008 she was part-time pastoral assistant and organist at St. Michael’s Parish in Belleville.

During 1987 – 88 she had a sabbatical year at the Avila Retreat Centre and Music School in Thunder Bay which included yoga and massage. In 1988 she participated in the Summer Institute at the Institute for Retreat and Pastoral Ministry sponsored by Retreats International at the University of Notre Dame.

Around 2005 until about 2015 she offered prisoners the program, ‘Freeing the Human Spirit’ at both the Bath and Joyceville Institutions. Over the years she attended various music summer courses including courses at the Royal Conservatory of Music in Toronto and at the Ontario Liturgical Conference for church musicians. She also took many courses in Yoga and Therapeutic Touch. She offered Tai-Yoga Massage at the Seniors’ Centre in Kingston as well as at Providence Motherhouse. Her love of music drew her to offer music therapy sessions at the Motherhouse infirmary, at Providence Manor and at Providence Care Hospital where she also played the organ for Sunday Mass. Sister Marie was a cheerful person full of life who generously shared her gifts with many different groups. She accepted her final illness peacefully with resignation.

Sister Marie died peacefully in the infirmary on June 10, 2022.

The Mass of Christian Burial, held in the Chapel of Mary, Mother of Compassion, Providence Motherhouse on June 17, 2022, was presided over by Friar Ed Debono, OFM Conv., who also delivered the homily. Burial was at St. Mary’s Cemetery, Kingston.