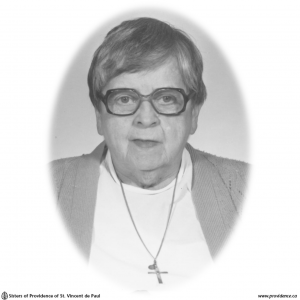 Margaret Mary Frances Lamarche was born in Kingston, Ontario, on the 18th day of May, 1907, and baptized at the Cathedral Parish in Kingston on May 20th, 1907. In her family, she was known as Marie and is one of eight children of Joseph Adelard (known by everyone as Dolor) and Ellen Sullivan.

Joseph Adelard came to Kingston from Coteau Junction, Quebec, at the age of 17, met and married Ellen Sullivan. He worked for 48 years as a lone linesman for C.N. Telegraph keeping the lines open from Belleville to Brockville. The couple raised their children in a house on Johnson Street giving hem a good Catholic upbringing. This is evident from the fact that Laurie became a priest and Marie and Audrey both religious sisters. Father Laurie and Sister Audrey are the only two surviving children of this family.

Marie completed eight years at St. Vincent’s Academy where she was taught by the School Sisters of Notre Dame. After grade school, she proceeded to take the two year Commercial Course at Notre Dame High School. On leaving school, she held a job as cashier for the National Bake Shop, which is still at the same location on Princess Street in Kingston. Marie also took 2 years of Nurses training and 2 years of Lineotype training. As Marie always wanted to be a Sister and, even though she was taught by the Sisters of Notre Dame, she chose to enter the Sisters of Providence because she wanted to be a nurse and did not want to join a French congregation.

Father S. Lesage of St. Mary’s Cathedral in his letter of recommendation to us when she entered states the following: “Margaret Mary Frances Lamarche is a young lady of excellent Christian and moral character and is very devout in her religious practices. She should make a good religious and a useful member of your community”.

Sister Mary Leon spent most of her religious life caring for the aged and infirm in our hospitals and homes for the aged in Kingston and Montreal. She also looked after the needs of the girls at Rosary Hall in Toronto for one year and did housekeeping for two years at St. Mary’s Hospital in Montreal. During sister’s retirement years, she worked at the switchboard and in the dining room at Heathfield.

Late in life, Sister M. Leon suffered a badly broken leg and arm. She remarked “Oh well!  It is good penance for your sins.” showing the simplicity of her faith and trust in Providence. At times like this, her beautiful spirit showed through a rather gruff exterior.

In 1986, Sister slipped on the cafeteria floor and fell, twisting her right leg and landing on her outstretched right hand. X-Rays revealed a comminuted intracondylar fracture of the right femur and a right colle fracture. On the 11th of January she underwent open reduction and fixation of the femur and closed reduction of her right colles fracture.

During her lifetime, Sister Mary Leon had great devotion to the Sacred Heart, Our Mother of Sorrows and Our Lade of Perpetual Help. She always strove to be charitable towards others and this is manifested in her dedicated love and care of the aged and inform.

On November 18, 1989, Sister Mary Leon died in the Marian Infirmary II at Heathfield around 4:30 p.m., feast of Our Lady of Providence, and was buried on November 21, 1989, feast of the Presentation of Our Lady.

The funeral Mass for Sister Mary Leon was concelebrated by:

The main celebrant of the Mass was Sister M. Leon’s brother, Fr. Laurie Lamarche. Archbishop F. J. Spence delivered the homily and reminded us of the fact that those who do things out of love of God and one another should have no fear of death. During her life, Sister lived a life of love with the Lord bringing the healing touch of Christ to others, because of her love for Him, in her care for others throughout her religious life. Archbishop Spence further stated that followers of Christ are asked to grow in love, to bring compassion and understanding to the poor, the weak and those suffering and that grace and mercy will be hers now and be present to her in the fullest measure, surrendering to little things that could be more meaningful.