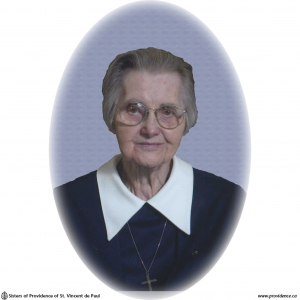 Marguerite Marion Farnand was born on February 9, 1908 in Buckingham, Quebec, a town located in the foothills of the Laurentians about twenty miles from Ottawa. She was the eldest of ten children born to Mary Ellen Lavell and Anthony Farnand. Her parents owned a farm about five miles from Buckingham and belonged to St. Gregory’s Parish. Sister grew up in a loving, caring family whose chief entertainment was to sing around the piano with her sister, Lillian, playing all the current songs.

Some of her earliest memories were of attending Mass kneeling beside her father watching his eyes and his devout response at the consecration. She recalled how her mother taught her and her brothers and sisters their catechism while she knitted scarves, mittens and socks. Her father, also, loved to tell them stories of Jesus’ life.

She began her early education, which included music, in the local country school. After completing her primary and junior education there, she went to St. Lawrence Academy in Buckingham from 1923 to 1925, being registered in the Model Senior Course taught by the English Grey Sisters from the United States. She also continued her music, obtaining her advanced Senior Certificate from the Dominion College of Music. It was during these years of contact with the Sisters that she began to feel called to Religious Life. Being especially drawn to the Grey Sisters, she was advised not to enter the Canadian Grey Sisters because they were only French-speaking at the time.

While in search of an English community, a visit from Sister Mary Monica McCoy, a first cousin of her mother, ended the search and she entered the Novitiate of Sisters of Providence at the House of Providence in Kingston, Ontario, on August 5, 1925.

Her first year of Novitiate was a difficult one. Loneliness brought many thoughts of leaving but always the words of scripture and a retreat reinforced her desire to remain. During the year of postulancy, she continued her music studies and obtained the Associate Certificate from the Dominion College of Music.

In 1927 she made her First Profession taking the name, Sister Mary Modesta. Then she and two other Sisters spent the next year completing their high school education. In 1929, she was sent to Providence Hospital, Moose Jaw, to train as a nurse. She obtained her R.N. and her licence to practise in Saskatchewan in September 1932. That same year Sister was sent to Saint Paul’s Hospital, Saskatoon, for further post-graduate work in the operating room. She then took charge of the operating room in Moose Jaw in early 1933.

In 1935 she had two major surgeries for thyroid in Edmonton and, after convalescence there, she returned to Moose Jaw where she took charge of the surgical unit and taught surgical nursing and later, set the registered nurses’ exams in surgical nursing for the province of Saskatchewan and corrected the papers.

During 1945-1946, she took a course in ward teaching and supervision at McGill University.

After free hospital insurance was obtainable in Saskatchewan, she saw her surgical ward grow by leaps and bounds. During this time she earned the trust of the surgeons with whom she worked.

In September 1951, she was transferred to Saint Mary’s Hospital in Montreal where she remained until 1961. During this time she was Supervisor of the Surgical, Medical and Gynecological Units. In 1961 she was appointed Superior of Providence Manor in Kingston.

Sister Marion was elected to the General Council in 1965 as the Assistant General Superior. During her term of office, she with Mother Lenore Carter, General Superior, toured Latin America to find and secure a place of work for our Sisters following the request of Pope Paul VI for Canadian Women Religious to work with the poor in Latin American countries. The Congregation’s missions in Guatemala and Peru were opened at this time.

Following her term of office she went to St. Vincent de Paul Hospital as Superior and Supervisor of Nursing. Then in 1974 she returned to Providence Manor as Superior. In 1980 she was transferred to the Motherhouse to assist Sister Margaret Rose Fardella in the infirmary until 1984 when she replaced Sister Margaret Rose as director of the infirmary until 1988. In 1982 she was assigned as Local Co-ordinator of the Motherhouse. After several fractures of her spine, Sister Marian was engaged in part-time work in the sewing room. Then in 2001 she became a patient in the infirmary after fracturing her left femur. After recovering from this fracture, Sister Marion was able, with the use of a walker, to move about. On the occasion of her 100th birthday on February 9th, 2008, Sister’s family arrived to celebrate this happy event with her. She appeared to have been given a new lease on life. Many days following Sister Marion was up and dressed bright and early and often went to the dining room for breakfast and other meals. As she neared her 101st birthday, she began to experience less and less energy and was eventually confined to her bed. She returned home peacefully to her loving God on January 30, 2009.

Sister Marion is predeceased by her parents, her sisters, Lillian Flynn, Loretta and Bernadette. She is survived by her brothers, Regis, Leonard, Emmett, Raymond, Redmond and Harold all of whom, except one, were present at her funeral. Many nieces and nephews were also in attendance. The Mass of Christian Burial, held in the Chapel of Mary Mother of Compassion, Providence Motherhouse on February 2, 2009 was presided over by Friar Edward Debono, OFM Conv. Msgr. Don Clement was the homilist.