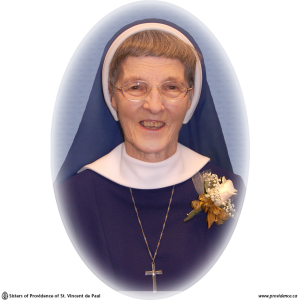 Sister Marlene, baptized Valentine Rose Schuster, was the youngest of five children of Theresa Ritt and John Schuster. She was born on May 5, 1931 in Heisler, Alberta where she grew up surrounded by loving parents of deep faith. When her father became ill and was hospitalized, she saw the Sisters of Providence in action. Because of the kindness and caring of the Sisters, she knew she wanted to become part of them.

But before she took this step in her life, she worked as a Ward Aid at St. Mary’s Hospital in Camrose for a few years. She then enrolled in the School for Nursing Assistants at St. Vincent de Paul Hospital in Brockville, Ontario. Following her graduation she entered the Novitiate of the Sisters of Providence of St. Vincent de Paul in Kingston, Ontario on September 15, 1958.

After making her First Profession of Vows she ministered in nursing at St. Mary’s of the Lake Hospital, Kingston, then at St. Anthony’s Home, Moose Jaw and St. Joseph’s Hospital in Edmonton. In 1978 she returned to St. Anthony’s Home in Moose Jaw. In 1981 she was assigned as Pastoral Assistant at St. Francis Parish in Smiths Falls and to Pastoral Care at Rideau Regional Centre. She became the Roman Catholic Chaplain at Rideau Regional Centre in 1984 until 1986. She was then assigned as Pastoral Assistant at St. Francis Parish in Smiths Falls. She remained in this position until 2010 at which time she moved to the Sisters’ Residence at Providence Manor in Kingston. She assisted as sacristan and visited the residents of the Manor. During her time at St. Francis Parish, Rideau Regional Centre and Providence Manor Sister Marlene made many friends among the people she served and with whom she worked. She will be remembered for her love, profound compassion and bright smile.

Sister Marlene was called home to her loving God on Friday, April 25, 2014. The Mass of Christian Burial, held in the Chapel of Mary, Mother of Compassion, Providence Motherhouse on April 30 was presided over by Friar Ed Debono, OFM Conv., assisted by several members of the clergy. Rev. Brian McNally with whom she had worked in Smiths Falls was the homilist.