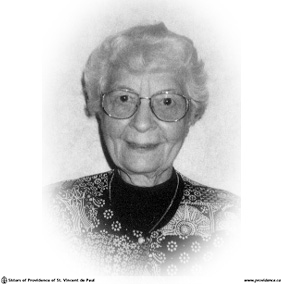 Some people preach the gospel without words, simply by the quiet, faithful example of their lives. Those who were close to Sister Martha described her as being one of these special followers of Jesus.

Sister, who died suddenly of cardiac arrest in Regina General Hospital on December 19, 2000, was born on February 25, 1917, the third of five children born to Anton and Clara Diethelm. Martha’s father emigrated to Canada from Switzerland. Here, he met and married Clara (Dentinger). The Diethelm family settled in Assiniboia SK.

Before Martha responded to the call to religious life she worked as a stenographer. At the age of twenty-six she was diagnosed as having cancer of the throat. Upon later examination there was no longer any evidence of the tumour in the adenoid region or any evidence of cancer elsewhere. However, as a precautionary measure she was given a series of radiation treatments. Doctor Bawden, who examined her from time to time, was pleased to report that there was found no suggestion of any return of the growth.

In 1947, at the age of thirty, Martha entered the congregation of the Sisters of Providence of St. Vincent de Paul. Novitiate companions recall her quiet sense of humour and how she loved to play baseball. Like a deer she could, in her graceful way, outrun everyone. Martha had no trouble adapting to religious life. She described her novitiate days as passing too quickly and as being happy days indeed. She put her trust in Providence in regard to her health and trusted that she would spend many fruitful years in God’s service. She said she would regard whatever decision was made regarding her acceptance as God’s will for her.

Recognized as a woman possessing a variety of gifts, Martha’s background included work as a primary teacher, a nurse and social worker. However, it was in accountancy and Business Management that Sister primarily ministered in hospitals and other congregational institutions, chiefly in the West. Sister also served on many committees, Auxiliaries, boards and parish councils, in Kingston, Daysland, Winnipeg, Vancouver and in Moose Jaw. Her quiet unassuming competence and generosity was appreciated by all who knew her. Many spoke of her prayerful presence to them while she worked diligently to assist others in any way she could. In spite of a very busy schedule Sister always too time to visit the sick whenever she could.

Sister Martha, described as having a very spirited walk, also enjoyed bowling, reading, crocheting, listening to music, as well as playing scrabble and bridge with friends.

Sister Martha underwent surgery in late November, 2000 and was thought to be recovering well. However, she suffered another heart attack and it seems decided it was best to spend Christmas in heaven. She is predeceased by her parents and by her three brothers, Tony, Joseph Otto and Laurence. Sister Martha is survived by her sister, Alma, of Assiniboia SK. Because of a severe winter storm, Alma and other relatives were unable to be present at a vigil wake service on the 27th or at the Mass of Christian Burial celebrated by Father David Cottingham C.Ss.R. in St. Joseph’s Church, Moose Jaw on December 28th. In his homily, Father Cottingham remarked that Sister Martha served God faithfully and preached the good News until her physical heart gave out Approximately one hundred and twenty-five people, including fifty-two members of Providence Place auxiliary, attended the funeral. Besides Sisters Theresa Matthews, Mary Fidelis and Stella Szybisty, two other Sisters of Providence, Sister Jean Edey of Vancouver, a classmate of Martha’s and Sister Rita Gleason from Edmonton, were able to take part in the celebration of Martha’s life and to return her into the hands of her Loving God. She was laid to rest next to Sister Rose of Lima. Fellow employees remarked on Martha’s kindness to them. She was described as a happy, helpful person who enriched their lives and never said a critical word about anyone.

A memorial service, attended by many of the sisters in the Kingston area, took place at Providence Motherhouse on January 2. Several Sisters who shared memories of Sister Martha remarked on her gentle, quiet, supportive presence to them. It is fitting that she is at rest in the prairies where she live and which she loved so much. Sister will be missed and lovingly remembered by the members of her congregation, by her family, friends and co-workers. Mary her spirit continues to be an inspiration to us all.