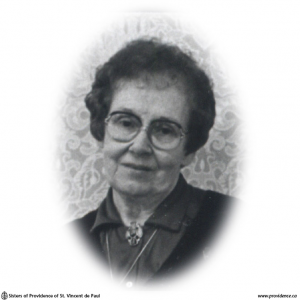 Martha Helena McKenna, born on September 8, 1910 at Merrickville, Ontario, was the seventh of nine children born to Christopher McKenna and Anna (O’Connor). Sister Martha, as she was called at the time of her death on March 7, was the last surviving member of her immediate family.

The McKenna family lived on a three hundred acre farm near the village of Merrickville. It was, as Martha recalled, a stone’s throw from the Rideau River. Martha enjoyed school from the time she began to walk two miles to the one room country school in the district. Even in grade one she loved to read and to write, and to dramatize the teacher for the amusement of her siblings when she returned home. Weather conditions often caused Martha to be absent but nevertheless she did well in her classes and was determined to continue her education in the high school at Merrickville, at that time a village with a population of about nine hundred. She reveled in public speaking, debates, helping with the school paper and taking part in the parish St. Patrick’s Day skits. Since this continuation school only went to grade twelve, Martha would need to travel to Smiths Falls or Kemptville to continue with grade thirteen. Lack of finances prevented Martha from continuing her education for a while. For a year and a half she remained on the farm helping with the harvests and other necessary tasks. In her spare time she studied four grade thirteen subjects at home and achieved certification in them all from the department of education.

After attending a parish mission at St. Anne’s church in Merrickville, Martha felt called to follow in the footsteps of her aunt, St. Mary of the Sacred Heart, formerly called Martha, after whom she herself was named. After consulting with Father Cunningham, who preached the mission and with the parish priest, Father Keaney, Martha entered the Congregation of the Sisters of Providence of St. Vincent de Paul, Kingston, Ontario on January 6, 1931.

Martha pronounced her first vows on March 25, 1933 taking the name of Fleurette because of her devotion to St. Therese Lisieux, the Little Flower. (In 1984, Sister Fleurette received permission to return to her family name.) After her profession of vows, Sister went to Ottawa Normal School to train to become a teacher. Here, she distinguished herself by being chosen as the valedictorian of the graduating class. In 1934 Sister began her teaching career in St. Francis School, Smiths Falls. Over a period of nearly fifty years Sister served as a teacher of all the grades from one to thirteen, and in some instances also as principal, of separate schools in Kingston, Toronto, Newmarket, King, Gananoque and Belleville.While engaged in the teaching profession Sister Martha did not neglect her own education. She obtained her Bachelor of Arts degree from Ottawa University, and a Bachelor of Journalism degree from Marquette University. She pursued post graduate studies in drama, history, and in theology at Notre Dame, Indiana, and the Fordham University of New York. She also obtained a certificate in Shakespearean studies from the University of Birmingham in London, England. Sister took educational courses in special education, shop work, physical education, and in arts and crafts.

While Sister was teaching in King, a crash between two small airplanes occurred near Sacred Heart School and subsequently caused Sister to remain in touch with the RCAF squadron and to pray for the safety of its members all her life. Six members of the Air Force would later form an honor guard at her funeral. Sister Martha was blessed with a great deal of energy which she used to serve on several committees and pastoral councils. She wrote many articles, usually on social justice themes, which were published in the religious and secular press. Sister published seven books on education as well as one on community history. Sister also published the devotional booklets, Jesus Our Godman, Little Beads on the Rosary, and Steps to Calvary.

When Sister retired in 1980, she poured her energies into the prison ministry, visiting, tutoring and writing letters to inmates in the Kingston prisons for men. In 1989 she extended her ministry to the Arizona State Prison, visiting this institution three times. That same year sister was presented with the annual Good Samaritan Award from the inmates at Collins Bay Penitentiary, Kingston. When no longer able to visit the inmates she kept up a correspondence with many of them. It was shortly after her retirement that Sister also visited Peru and Guatemala. She wrote accounts of her experiences with the Sisters and their work in these countries and pleaded for more aid for the poor. She also had a third world experience at the Spiritan Mission Institute in Trinidad and Tobago. These experiences had a profound impression upon Sister Martha’s compassionate heart. Sister never tired of working to nourish a culture of life and in particular in raising awareness around the moral failings of the death penalty wherever it was still in effect.

Sister Martha had a very appreciative nature and never let an opportunity go by without thanking anyone who was kind to her. Whether such people were in the public forum or simple everyday acquaintances, Martha acknowledged every gesture made on her behalf. She made an effort to be positive in accepting the changes to religious life, which sometimes caused her some discomfort. A favourite biblical quote found in her collection was from Nehemiah “Do not be sad, for rejoicing in the Lord must be your strength.” In 1999, a fall resulting in a seriously broken leg, as well as a series of small strokes, gradually forced Martha to retire to the Motherhouse Infirmary.

Sister, like her patron saint, Martha, was all her life busy about many things, but all of them were in the service of her God in whom she had a deep faith. Then, after her busy life slowed down she, like the Little Flower who also was her patron for many years, continued to serve her God by her inability to do anything but bear her weakness and let others attend to her needs.

Throughout her life Sister Martha retained a childlike quality which caused her to be keenly interested in many things and in awe of everything. Every day was a gift and an exiting adventure.

At her wake many heart warming stories and memories of Martha were shared by former students, teachers, friends, and Sisters. Archbishop Francis Spence, accompanied by several priests, presided at the Mass of Christian Burial on March 10, 2000. In his homily, Monsignor John Murphy, friend and former pupil, said we would all remember Martha’s physical death as just another act in her story of hope coming to completion. She who taught so many so much will continue to teach us about the Lord from her new home in heaven. No doubt, Martha is enjoying the reward of her many years of loving service in the embrace of her loving God, and also with her deceased family members and friends. Martha made a great impression upon all who knew her and she will long be remembered by those she leaves behind, especially the members of her religious congregation. May she rest in peace.