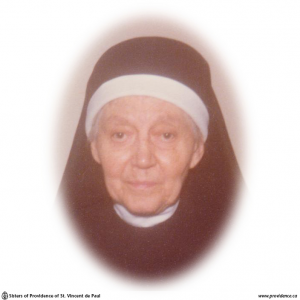 On the sixteenth of July, the feast of Our Lady of Mt. Carmel, after 66 years and 14 days of religious life, Sister Mary Adalbert was called to her eternal home. To her the following words could apply “As you live, so you will die”. A life of quiet selfless service of God and His needy ones was crowned by a close as quiet and selfless.

Sister Mary Adalbert spent her last ten years in the infirmary at Heathfield, but for the greater part of this time she kept busy helping in the diet kitchen, and devoting herself to the care of a Sister who was ambulatory, but because of loss of memory needed constant watching. When she was no longer able for such tasks, she visited Sisters confined to their rooms, praying with them and for them.

A heart ailment which afflicted her from early life, but which did not deter her from arduous work in various institutions of health care conducted by the Community, became more serious in her later years, so that she was obliged to have a pace-maker. Yet, she never complained, but continued her two activities – her prayer life and her interest in others.

On Saturday, July 15th, she felt too weak to assist at Mass, but in the afternoon was able to walk in the corridor. On the 16th, at 3 a.m., the night nurse made her routine check and found her in a dying condition. The nurse summoned Sister Margaret Rose, the Superior, but when Sister came Sister Mary Adalbert had breathed her last.

Sister Mary Adalbert, as Amalia Rozmahel, was born in Ord, Nebraska, on December 22, 1892. Her parents, of Bohemian ancestry, moved to Alberta in the wave of immigration to the prairies in the early 1900’s. Two years after our Community opened the hospital at Daysland in 1908, Amalia’s grandmother was admitted for surgery. As the old lady could not speak English, Amalia accompanied her and remained with her as interpreter, meanwhile helping around the hospital. She was impressed by the Sisters, especially the Superior, Sister Mary Angel Guardian, and very soon felt attracted to religious life. Three years later, at the age of 20, she accompanied Sister Mary Angel Guardian to Kingston and entered the novitiate, then at St. Mary’s of the Lake. She was our first candidate from the Canadian West.

After profession Sister trained as a nurse at St. Vincent de Paul Hospital, Brockville, and remained on the staff there for seventeen years. For the next thirty years, 1937-1967, she shouldered the responsibilities of Superior: at Providence Manor, two terms; at St. Mary’s Hospital, Montreal, when our Sisters took over the management after the departure of the Grey Nuns in 1943; at Providence Hospital, Daysland, during which time a new hospital replaced the old one where she first met our Sisters in 1910; and the Father Dowd Home in Montreal.

She then spent two years at St. Mary’s of the Lake Hospital as visitor to the patients, when a serious illness required treatment in Hotel Dieu for two months. On December 20, 1969, she retired to the Marian Infirmary.

The funeral Mass on July 18th was concelebrated by His Grace, Archbishop Wilhelm, Monsignor J.A. O’Neill (a friend from her Brockville days), Monsignor A.J. Walsh of the Church of the Good Thief, Kingston, Father B. Price, rector of the Cathedral, and Father Dan Ryan, who was supplying at the time as chaplain at Heathfield. Monsignor Bernard Walsh of St. Joseph’s and Father Don Clement of Holy Family were present for the Mass. Father Ryan offered the prayers at the grave.

Sister Mary Adalbert will be remembered by her Sisters for her exemplary religious life of prayer and dedicated service, and by the patients and the families of patients with whom she came in contact in the various institutions of which she had charge for her sympathy and kindly care.