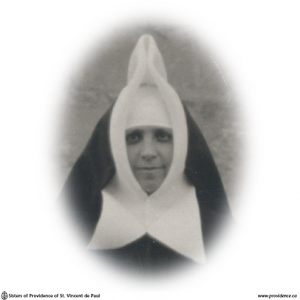 Sister Mary Adelaide died suddenly in Sacred Heart Convent, Arnprior, shortly after midnight on New Year’s Eve. She was in her usual health when retiring that evening but suffered a fatal seizure which the doctor diagnosed as “acute edema of the lungs.”

About twelve o’clock when all was quiet in the house, Sister M. Norbert thought she heard a moan and going into the hall met Sister M. Adelaide on her way from the bath room holding a wash cloth in her hand. She told Sister M. Norbert she was dying and to call the doctor. At once the doctor and priest were summoned and both came immediately. Fortunately they had not retired, so there was no delay. After the priest anointed Sister she lived only a few minutes; it was then 12.30 a.m. New Year’s day. By this time the Community had assembled, but before they could realize it all was over for their beloved Superior. The Mother House was notified at once and her people in Perth.

Sister M. Adelaide, the former Gertrude Doyle, was the daughter of the late Mr. and Mrs. Bernard Doyle, Perth. She received her early education in district schools and graduated as a teacher after attending the Ottawa Normal School. She entered the Novitiate at St. Mary’s of the Lake, on July 5, 1911, and during her religious life was engaged in various schools in Belleville, Arnprior, Perth, Glen Nevis, and Portsmouth. About two years ago she was assigned to St. Joseph’s Vocational School, Winnipeg, and was recalled during the past summer to take the office of local Superior of Sacred Heart Convent, Arnprior.

A faithful religious at all times Sister M. Adelaide gave generously of her time and talents in the service of God. In the class room or as Superior her life can best be summed up in the tribute of her Community: “All who had the happiness of knowing Sister M. Adelaide will remember her many outstanding qualities of charity, generosity and kindliness to all.”

On Saturday morning, Jan. 1st, requiem Mass was offered for the repose of her soul by Rt. Rev. J.T. Warnock in St. John Chrysostom Church, Arnprior, after which the remains were taken to Kingston. On Monday, after Solemn Requiem Mass in Our Mother of Sorrows’ Chapel, House of Providence, burial took place in St. Mary’s Cemetery. She is survived by three sisters and one brother.