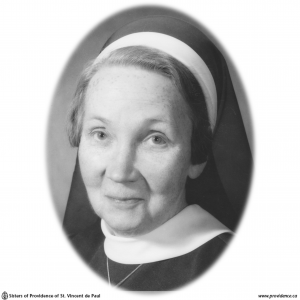 Mary Agnes Dorian was born in Belleville, the second of three children born to Edward and Annie (McCormick). She received her early education at Avondale Public School and St. Michael’s Academy and her high school at Belleville Collegiate and Vocational School. As far back as she could remember she wanted to be a Sister. Her parents were in agreement about this. Her father indicated that the convent was a good place for her. Her mother made her postulant dress and was very happy about Mary Agnes’ decision because her desire to be a Sister had never materialized. The Sisters who taught her at St. Michael’s Academy as well as her music teachers were a great inspiration to her.

She entered the Sisters of Providence on August 15, 1933. After 2 years of Novitiate, Sister Mary Adele was assigned to the admitting office and switchboard at St. Vincent de Paul Hospital in Brockville. While she was there she recalled going on a collecting tour with Sister M. Antoinette to all the businesses in Brockville to request funds to pay the coal bill.

After one year she was assigned to St. Mary’s Hospital in Camrose, Alberta, where she remained for 30 years as business manger. She then went to Providence Hospital in Daysland, Alberta, in the same capacity for one year. In September of 1967, she was assigned to the Father Dowd Home in Montreal as Superior, Administrator and Business Manager. In this same capacity, she went to St. Anthony’s Home in Moose Jaw in 1973 where she remained for the next five years. Finally in 1978, she was assigned to the Motherhouse Business Office until January 2001 when she retired from active duty.

Sister possessed a calm, efficient ability in her field. Her cheerful, helpful, sympathetic manner, ready laughter and Irish charm endeared her to many.

Sister Mary Adele was called home to her loving God on April 6, 2005, with several Sisters at her bedside.

The Mass of Christian Burial, held in the Chapel of Mary, Mother of Compassion, Providence Motherhouse on April 6th was presided over by Reverend Msgr. Bernard Walsh, assisted by several members of the Clergy. Rev. Gerald Byrne was the homilist.