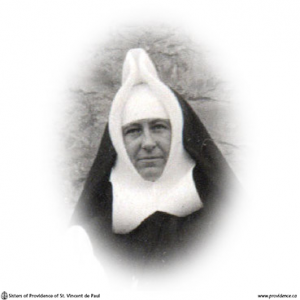 Sister Mary Adrian, Anna Winnifred O’Rourke, was born at Curran, Prescott County, Ontario, on January 20, 1890, the only daughter in the family of Martin O’Rourke and Winnifred Fisher. She was baptized five days later in the parish church of St. Luke.

On January 10, 1912 she entered the Novitiate of the Sisters of Providence then at St. Mary’s of the Lake and pronounced perpetual vows on August 10, 1916.

Her life was devoted to the care of the sick, the aged, the needy children, either in the kitchen preparing their meals, or in assisting in the nursing. After a few years at St. Mary’s Orphanage and at St. Vincent de Paul Hospital, Brockville she was assigned to the western missions and served for about twenty-five years in various houses in Saskatchewan and Alberta. The remainder of her active life of almost fifty years was spent at Providence Manor. A beautiful tribute to her work there is a letter she received from the late Dr. W.E. McNeill, one of the best known and best loved of Queen’s professors. Dr. McNeill’s housekeeper spent her last years at Providence Manor, and the professor visited the lady frequently. Here is his letter:

Though I had no personal responsibility for the care of Miriam Couper who died yesterday, I was an interested observer. I was deeply impressed with your warm human kindness and your constant desire to make Miss Couper comfortable. Every sister at the House of Providence has been at all times highly co-operative, and while it is unfair to give precedence where all are perfect, I cannot help thinking especially well of you since I saw most of you.

You are doing the greatest work on earth and you have part of your reward in the high respect and admiration your good heart and your good deeds arouse in onlookers. I know that Miriam Couper loved you greatly.

May you have great satisfaction in the years to come. With respect and good wishes.

When no longer able for strenuous duties at Providence, she visited the sick, and prayed with the residents especially the dying and performed countless little acts of kindness for busy sisters, such as sewing and laundering the linens for teachers or others whose duties kept them out of the house for the greater part of the day.

In 1967 after undergoing surgery on her knee she came to the infirmary at the Mother House. Although she suffered slight cerebral accidents from time to time, she was never completely incapacitated for any length of time until December 23, 1972 when as a result of another stroke she fell and fractured a bone in her leg. From then on her speech was affected, it was difficult for her to make herself understood; but the nurses got her up each day and took her to Mass in the infirmary chapel until a few days before her death, on April 3rd.

The funeral Mass was concelebrated on April 6th by Msgr. Hanley, Vicar General and Father Cullinane who was directing the community retreat. Father Buckley, chaplain, served at the Mass and offered the prayers at the grave in St. Mary’s cemetery.

There are no survivors of her immediate family, but a number of nieces and nephews live in the Ottawa Valley or in the western provinces. The nephews form Ottawa and one from Winnipeg attended the funeral.