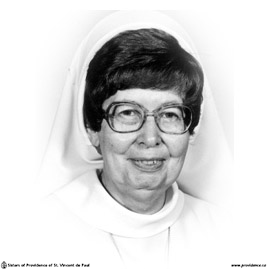 Isobel Marie McConville was born in Trenton, Ontario on April 14, 1914 to Sara Shoniker and Harry McConville, the eldest of three Girls.

Sister M. Agnes Clare received her elementary education (Grades 1 – 10) at St. Peter’s School, Trenton and Grades 11 and 12 at Trenton High School. On July 6, 1932 she went to Kingston to be present for the official opening of Heathfield. On August 15, 1932 she was received as a Postulant at Heathfield but had to return home three weeks later because of poor health resulting from a tooth extraction. On September 14th she had surgery at Hotel Dieu Hospital in Kingston for a facial abscess. After one week in the hospital she returned home and received treatment for the following three months. Then on January 6, 1933, she once again entered the Novitiate of the Sisters of Providence of St. Vincent de Paul. Following First Profession Sister was sent to Maryvale Abbey to complete Grade 13 after which she attended Ottawa Normal School.

Sister taught in the Ontario separate school system in Smiths Falls, Chesterville, Tweed, King, Glen Nevis, Holy Rosary, Belleville, St. Peter’s, Trenton and Sacred Heart School in Batawa. Sister served as principal in many of these schools as well as being Superior of some of the convents. During her teaching career, she also taught at St. Malachy’s School in Montreal.

Sister retired from teaching in June 1975 and after the closure of the convent in Batawa in November of that same year, she returned to Smiths Falls where she ministered as a parish worker and as sacristan in the rectory chapel for Monsignor J. J. Fogarty as well as serving as secretary of the Northern Commission of the Archdiocesan Pastoral Council. In 1983 she went to St. Gregory’s Parish in Picton to work in the rectory office until ill health necessitated her transfer to the Motherhouse in September 2001. During the time she was in Picton, Sister spent ten of those years as a weekly parish visitor to the handicapped residents at Prince Edward Heights where she endeared herself to both staff and residents alike.

Sister was called home to her loving God on July 4, 2009 in the 77th year of her religious life. She is predeceased by her parents and her sister, Doris Defosse. She is survived by her sister, Phyllis (Al) Cotten of Ottawa. Her prayerful life, ready wit and great love of family, community and all people gained her great respect.

The Mass of Christian Burial, held in the Chapel of Mary, Mother of Compassion, Providence Motherhouse on July 7th, was presided over by Friar Edward Debono, O.F.M.Conv., who also delivered the homily. Other members of the clergy were in attendance.