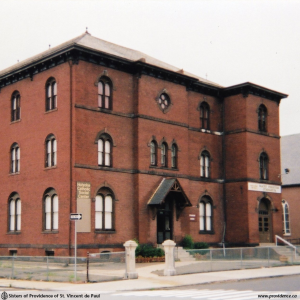 Catherine McCummiskey born in Kingston, entered the Novitiate August 12, 1873, at the age of seventeen. She was a cousin of Mother Mary John, and like her, came early to serve God in religion. She was duly admitted to the Holy Habit, and made Religious Profession, November 25, 1875, as Sister Mary Agnes. Soon after she was sent on mission and was employed principally in teaching for nearly six years, when failing health necessitated a change, but she continued in active service for four years longer, or until one short month of her death.

Sister Mary Agnes was of a bright, happy and amiable disposition, very kind and sympathetic in her nature and very unselfish. Young and full of hope, she had no desire to die; consumption marked her as its victim; the hacking cough, the wasting frame and other unmistakeable evidences of debility, told those around her that the thread of her existence was being rapidly spun, and soon her earthly course would be terminated, but she, who was most concerned seemed utterly unconscious of the painful truth, or rather put it aside as too terrifying to contemplate. For two years she passed through the varying stages of the disease; steadily the work of decay progressed, but no murmur, no complaint escaped her lips, no indulgence or dispensation was sought, no release from labour requested, and though her duties were light they nevertheless required application and she generously gave it.

Her patience was admirable, and weakness, so far from making her querulous, rendered her more thoughtful of others and more indulgent. Nothing could pain her more than a reference to her weakness and failing health, yet she did not deceive herself is evident from the fact that she permitted her supply of personal effects to become fully exhausted, and she admitted on her death-bed that she knew she would never need to replenish them, hence, her mental suffering must have been great, for she thus deprived herself of the sympathy and kind attention which charity and affection would have supplied.

So long a term of years on the mission naturally endeared its associations and she was attached to the sisters and interests of the place, but when it was fully explained to her that her removal to the Mother House was desirable, she quietly and cheerfully acquiesced in the decision of her Superior and without a murmur took her leave. “Tis true she buoyed herself up with the hope of recovery; but when by degrees the truth forced itself upon her she sweetly resigned herself to God’s will, an evidence that throughout the weary struggle of declining strength, she was gradually schooling herself to accept the worst.

She made the annual retreat and was able to attend all the exercises. Fully conscious that her life at best would be short and with evidence of death’s approach present to her, it need not be questioned that she made her retreat with a sincerity that holds one in awe. She said on her death-bed that having made a good retreat and settled her affairs, there was not a shadow troubling her peace of mind.  Within a month after she laid aside her duties she had calmly resigned her pure young soul to its creator.

Her life was short, she died October 30, 1886, in the thirty-first year of her age and the fourteenth of her religious life. Every consolation of religion was afforded her during the brief period of her mortal illness and in the solemn pomp of the holy Requiem of All Souls’ Day she was laid in the cemetery to await the trumpet of the Resurrection Day. If it is sweet to live in religion, ‘tis still more consoling to die within its protecting shelter. There is no worldly pomp to mock the poor tenement of clay; no loud unmeaning wail of grief, no hollow tribute of praise, but fraternal charity draws to the bier our co-labourers who survive us; who with holy envy rejoice that we have reached the goal and while consoled by the memory of the good we may have done, they cease not to offer suffrages in our behalf, and to substitute for the panegyries with which the world pays tribute to the dead the low plaint of the deprofundis and the supplicating tones of the Miserere. “Precious in the sight of the Lord is the death of the Saints,” and worthy of every sacrifice is the privilege of dying in the grace of holy perseverance; of going before God with our vows fulfilled. May this grace be given to us all as we murmur in behalf of Sister Mary Agnes and the other deceased members of our Institute.