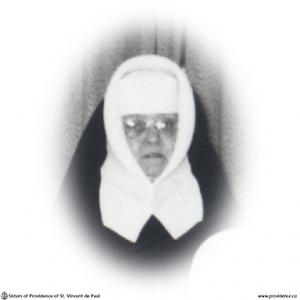 The “City by the Bay” is the hometown of many Sisters of Providence of St. Vincent de Paul. The illustrious place at the head of the list of these Sisters from Belleville, Ontario, belongs to Sister Mary Aileen, Malyea. True, two others had entered from this city before her, but Sister Mary of Providence, Horan (#15) and Sister Mary Juliana, Butler (#56) both chose to stay in Holyoke – in fact, the former became the foundress of the new congregation.

Loyola, as she was called, was born June 8, 1895, and baptized in St. Michael’s Church, Belleville, on June 16. She could remember that after this church was burned in December, 1904, the Catholics and non-Catholics worked together to raise money to rebuild it. They sold baked goods and put on concerts in Griffin’s Opera House on the south-west corner of Bridge and Church Streets and Mass was said in this same structure until the rebuilt church was ready in October, 1906.

A second fire in the parish affected Loyola’s school life. She had been attending the Belleville Separate School on John Street, south of the convent, until it burned on Sunday evening, November 24, 1907. The cornerstone for St. Michael’s Academy was not laid until May 10, 1908. In the interim, classes were held in a Protestant church – likely in the Sunday school rooms.

After her lessons at St. Michael’s, Loyola attended Business College in Belleville, studying shorthand and typing and then worked as a stenographer. Sometime in her formative years she had for “three terms” taken music from the Sisters. Perhaps it was her contact with the Sisters who taught her in the classrooms and music studio which gave her the idea, in her eighteenth year, that God might be calling her to become His Spouse. She says in her letter of March 16, 1914, to Mother Mary Francis Regis, Young, “I feel I know something of what to expect in the Religious life…my abilities and disposition may not be in accordance…but I hope to profit by the advice of those placed over me.” And so she came to the House of Providence to try her vocation.

The Motherhouse Annalist records that it was an unusually cold May 3 in 1915 when Loyola Malyea and two young ladies from Quebec province (Sister Mary Redempta, Donovan and Sister Alice G. Vincent) were received at 4:30 p.m. immediately after the reception, the Community held the ceremony of Veneration of the Relic of the true Cross. The Cross was to play a prominent role in the lives of all three postulants for each suffered from more than her share of illnesses and the two from Quebec had years of severe affliction prior to their deaths. In notes made in the course of her religious life, Loyola writes often of the church’s teaching on suffering and remarks that she had gone through much and felt that more was to come. Many Sisters, when asked for their memories of her, mentioned that she was often ill. Suffering had been part of her home life, too, for she had attacks of hay fever in the fall and her father was ill with T.B. at the time of her entrance. He was to die only four years later. Her constant desire through all her trials was “union with God” and an “intense interior life”.

When Loyola took her first vows, she was given the name of her maternal grandmother, Aileen. Her brother, James Edward, wrote a beautiful letter to her at that time which she kept to enjoy over the years. He expressed his belief that she was “worthy” of such a “blessed and happy position”. As it turned out her contribution was to be very important to the history of our Community on more than one occasion.

After profession Sister Mary Aileen took the three-year registered nurses’ course at St. Vincent de Paul Hospital, Brockville. For a few years after graduation she served in Smiths Falls and Brockville. During that period she helped in the care of Monsignor J.P. Hartigan, V.C., and pastor of Prescott, in his final illness. A month before his death he gave her a copy of “The Hound of Heaven” which he inscribed:

“Yet uncanonised, this little flower – Sr. M. Aileen – a torch from the light above – brightened dark says for her humble, grateful servant. At Prescott, Sept. 1927”

Monsignor Hartigan is a person of note in our history, for it was he who went to Rome to intercede for the Community, threatened with suppression, at the time of the Basil case.

Sister had surgery, herself, at Brockville. That may account for her presence in Gananoque and at the Motherhouse for a short time in the 1920’s; but she was anxious to return to hospital work and so was assigned to the west in 1928. It is not clear if she received training in Medical Records at Hotel Dieu, Kingston, or immediately upon her arrival in the west; but by 1930 she was involved in the record keeping necessary for the establishment of the T.B. unit at Providence Hospital, Moose Jaw, begun by Dr. John Orr and others. This T.B. unit was sponsored by the Anti-Tuberculosis League and revenue received from the Saskatchewan government enabled the hospital to survive financially in the difficult depression years.

During her work in the west, Sister’s physical health remained somewhat uncertain. She had surgery for cancer of the tongue. Then an event occurred which added psychological suffering to what she had already endured. She was chosen to accompany the ailing Sister Mary Francis Clare Cannon on the train east to seek help for a puzzling illness which doctors felt might be a brain tumour. It was a most difficult trip, although the train crew was most attentive and had a priest and a doctor meet the train at every main stop. Sister Mary Aileen realized as they approached Toronto that her companion was close to death and encouraged and assisted her to make her preparation for death just before she became unconscious. Sister Mary Francis Clare breathed her last just as the train drew into Toronto station. That was November 27, 1934.

The Brockville Annalist in January 1935, records that Sister Mary Aileen was on that mission, but still, “in a very poor state both mentally and physically” from her ordeal.  However, time is a great healer, and eventually Sister was able to take up her work in the hospital. In a note of condolence after Sister Mary Aileen’s death, Mrs. Dr. J.R. McAvoy lauds her work as medical record librarian and credits her with doing “the ground work for the first certification” of St. Vincent de Paul Hospital.

In 1947-1948 Sister served at St. Mary’s, Montreal. During that year three important events occurred: Sister added to her qualifications by registering as a nurse in Quebec as well as Ontario; she was elected delegate to the General Chapter; and her health suffered another setback as she had a heart attack.

For the last fourteen years of her active life, Sister Mary Aileen worked in the medical record department at St. Mary’s of the Lake Hospital, Kingston. In 1963 she was hospitalized again and soon after came to the Infirmary at Heathfield. For over twenty years she was to reside there, her only apostolate that of prayer and suffering. She was able to endure because she had laid a firm foundation. The following excerpt from her notes is not dated, but seems to be from her active years. It is preceded by a lengthy quote entitled, “The Apostolate of Suffering”.

“Tuesday p.m. – One more meditation on our Blessed lady and my retreat for another year will have closed. What have I given God during these eight days of grace? What has He given me? What are my resolutions? I am placing only two new resolutions in the care of Our Sorrowful Mother at 5 p.m. Resolutions:

What have I given God? Eight days of intense interior suffering. Coldness and inability to pray as I want to pray. But eight days (of) intense desire to give all. I did give you all, dear Jesus, although it is so little. I gave you every bit of myself – there is nothing that I am knowingly holding back from you. I want to give all. I give myself into Your Divine Hands as a piece of wax, warmed and made flexible by the breath of Your Divine Heart, to be molded and fashioned just as you want me to be. Keep this piece of wax warm by your love so that when Your Divine Fingers make pressure, they will meet with no resistance. Let me have no will but yours. Oh, I know I will fail you miserably, but, dear Lord, don’t Let me get away from you. Hold me to you by whatever means you like, but keep me fast. I’m so human.

I want again and again to thank you for the privilege of making this retreat – of being eight days alone with you. You, only you, know how I have enjoyed each second and how I hung on to each hour, not wanting to admit another hour was gone. I offer you your own Sacred Heart in thanksgiving for all the lovely hours I spent here in the Chapel all alone with you. Those were the hours I looked forward to, dreading someone else would be here, and yet longing to share you. I would have loved to stay at night; it was so full of just you here. You have been so good to me. What you have in store for me I do not know, though I have such awareness that I am going to suffer so much more. Oh, do with me as you will, but give me a constant increase of your love and your grace.”

This is the stuff of which holiness is made – an acceptance of the weakness of our humanity, a constant willingness to try again, and openness to all God has in store for us.

During the last years of her life, Sister Mary Aileen needed surgery once more in the late 1970’s. This time her life was endangered by a bowel complication. From then until her death, Sister Mary Adele, Dorian, a cousin from Belleville, who was on the Motherhouse staff was most attentive to her every need. Sister looked after correspondence, shopping and many other things which Sister Mary Aileen could no longer do for herself.

On March 20, 1985, about 4:10 p.m. Sister Mary Aileen died. She had been on oxygen for a couple of days previous and death was attributed to congestive heart failure and arteriosclerosis.

Many church documents in the last few years remind us of the call to holiness. The Synod just completed in Rome in 1985 devotes a section of its report to this subject saying, “Today we have a tremendous need of saints.” The notebooks Sister Mary Aileen left behind could make a text book on how to live a saintly life. Hopefully in the journals we are keeping today there are similar passages. We may not fully succeed in carrying out all we have written, but we are the measure of our desire. God, who sees what is in the heart, sanctifies us.