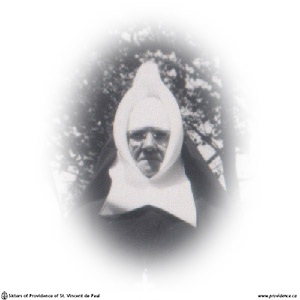 Sister Mary Alacoque (Margaret Ellen Scott) was born in the parish of Corkery, Carleton County, Ontario on August 9, 1877, the daughter of John Scott and Sarah Carroll. On January 9, 1907, she entered the novitiate of the Sisters of Providence, and after profession in 1909 was trained as a nurse in St. Vincent de Paul Hospital, Brockville, under the direction of Sister Mary Eulalia.

In 1912 she joined the pioneers, Sister Mary Angel Guardian and Sister Mary Camillus, at Moose Jaw, and remained for nearly 10 years. In 1921 she returned to Kingston and for six years served as Superior of St. Mary’s of the Lake Orphanage. In 1927 she accompanied Sister Mary Angel Guardian to Edmonton to purchase the building that was to become St. Joseph’s Hospital. She spent a year as Superior of Providence Hospital, Daysland, and was then transferred to St. Joseph’s and became the first Superior. The building was then used as a Home for the Aged, but in 1930 it was apparent that most of the residents were in need of nursing care, and the Home was redesigned as a hospital for the chronically ill or long term patients.

In 1944 Sister M. Alacoque was appointed by the Superior General, Mother Mary Anselm, to make a visitation of all the Western houses, and “to guide the Sisters in any problems that presented themselves”. In 1946, she was re-assigned to St. Joseph’s as Superior, and during her term of office a four-story wing, including a beautiful chapel, was added to the original building. Two years later she returned to Kingston and was on active duty at the House of Providence or the Motherhouse until after she celebrated her Golden Jubilee of profession in 1959. Even after being admitted to the infirmary with physical health weakening, her mental faculties remained alert, and she was able to assist at daily Mass in a wheel-chair until two weeks before her death, on November 2 at the age of 92. She had spent 63 years in religious life and had observed the Diamond Jubilee of profession in April 1969.

She and Sister Mary Irene, who had been her companion in the early days of Providence Hospital, Moose Jaw, had a double funeral on November 4.

Sister Mary Alacoque’s spirit of devotedness toward the aged and ill is summed up in a comment made by Sister Catherine Ryan, the present Superior of St. Joseph’s Edmonton:

“As a novice I was sent to work on the Lourdes floor at the House Providence, (that was where the most helpless invalids were looked after) and Sister Mary Alacoque was in charge. I well remember the first morning she introduced two or three of us to the ward. Some one asked her what we were to do and how. Her reply was ‘just treat every patient as if she were your own mother.’ I never forgot it. She was a very prayerful woman, strict, but kind.” May she rest in peace!”