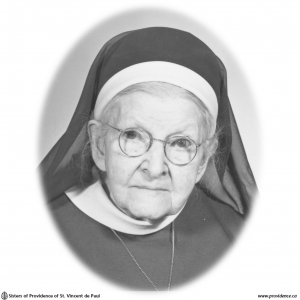 Mary Hawkins was born in Tweed, Ontario, on April 19, 1891, one of nine children of Michael Hawkins and Alice Murphy. Mr. Hawkins was a dairy farmer and gave that up to go into general farming.

Mary Hawkins had Grade X education when she entered, having attended Bogart School and then boarded at St. Joseph’s Boarding School in Toronto. Before entering the Sisters of Providence she worked as a milliner at Eaton’s in Toronto.

Having a great desire to dedicate herself to the Lord as a religious, she entered the congregation on the 4th of January, 1914. Father John Quinn recommended Mary Hawkins and he said of her: “she is one of the gems of the parish young ladies. She is a young lady that will please you unless I am mistaken”. She was 21 yrs old at that time and was, indeed, one of the “gems” of the congregation.

Mary Hawkins received the Holy Habit on January 15, 1914; pronounced her First Vows on January 21, 1915, taking the name of Sister Mary Alban; and made Final Profession on August 23, 1917, at the House of Providence in Kingston.

Sister Mary Alban trained as a nurse at St. Francis Hospital in Smiths Falls from 1915-1918 and remained there nursing until 1924 when she then went to Camrose as one of the pioneers at St. Mary’s Hospital. She was Directress of Nursing from 1924-1935 and Superior from 1936-1942. Sister was then transferred to St. Vincent de Paul Hospital in Brockville, Ont. In 1943, she studied to be an x-ray technician in Dr. Richardson’s office in Ottawa and practiced at St. Francis Hospital in Smiths Falls and St. Mary’s Hospital in Camrose. In 1947, after a two-week course at St. Boniface Hospital in Manitoba, she obtained her x-ray technician certificate.

In 1948, Sister Mary Alban was named Superior to St. Joseph’s Hospital in Edmonton and studied pharmacy during that time. She was elected to the General Council in 1950 and she remained on the Council until 1965, living at the Motherhouse in Kingston. During that time, she also assumed the duties as pharmacist of Heathfield. From 1966 to 1972 she was the first Superior of the sick and retired sisters at Heathfield and continued her duties as pharmacist until 1987, when she retired to Marian Infirmary II.

In 1938, Sister Mary Alban suffered her first coronary attack and perhaps this was the reason that up until 1987 she walked up and down the stairs rather than take the elevator and walked every opportunity afforded her, even to distributing medicines to the individual Sisters in their rooms. In 1952, she had the excision of a growth in the “bladder neck” and then in 1987 a large tumor axilla was discovered when she came to the infirmary after having the left eye cataract removed.

Sister Mary Alban was known as a woman of wisdom and possessing good common sense, and was loved by everyone. Her compassionate care of others was a daily event for her and she is remembered as a “Great Mother Theresa” for her charity and good works. Sister’s grandnephews and grandnieces visited her frequently and especially when she was a patient in the infirmary.

In 1981, Sister Mary Alban was commended to the General Council as one of our “unsung heroines” for her outstanding contribution to the Community. The service she gave to the sick was remarkable in knowledge, generosity and compassion. Everyone was touched by her humility, simplicity, charity, trust in Providence and prayerfulness.

Sister Mary Alban died on November 23, 1989, after Father Leo Byrne administered the Sacrament of the Sick and he and Sister Reinalda Kloosterman were with her when she expired. The funeral Mass was on November 27th in the Chapel of the Immaculate Conception, Providence Motherhouse. The Mass was concelebrated by Msgr. J.G. Hanley, Fr. Leo Byrne, Fr. D. Clement, Fr. P. McAvoy, Fr. J.J. O’Neill, Fr. J. Rozon, with Archbishop F.J. Spence as the main celebrant. Monsignor Hanley paid great tribute to sister in his homily.

Sister Mary Alban was a gift to all with whom she came in contact and will be remembered for many years to come.