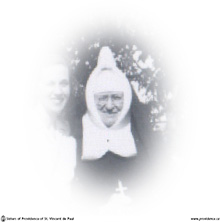 On January 30, 1968, Sister Mary Albert died in the Marian Infirmary, “Heathfield”, Kingston. The former Sarah Ann Gribbon was born and baptized in the parish of St. Alphonsus, Chapeau, P.Q., in the diocese on Pembroke. She was trained as a teacher and after following that avocation for a few years, she entered the novitiate of the Sisters of Providence in 1915. On making profession two years later, she resumed her teaching career in St. Michael’s School, Portsmouth (now Kingston) and carried on for almost thirty years her apostolate in the primary grades, preparing little ones for their first reception of the Sacraments of Penance and the Blessed Eucharist.

After retiring from full-time classroom duty in 1946, she spent six years in St. Joseph’s Vocational School, Winnipeg, helping in the religious instruction of emotionally disturbed boys and acting as Assistant to the Superior. Then for five years she did light duties at St. Vincent de Paul Hospital in Brockville, and in 1957 retired to the infirmary at the Motherhouse.

At this time cataracts on both eyes were causing her sight to be progressively weakened until she could no longer read and found it difficult even to make her way from her room to the chapel. A fall in her room causing a fractured hip really turned out to be a blessing in disguise, for the doctors, when she was in hospital decided that, in spite of her advanced age, they would remove a cataract from one eye. The result of the operation was satisfactory, and for the last five years of her life Sister was able to read, and her books gave her some little respite from the rheumatism which had been aggravated by her injury.

Around the New Year’s season, flu was prevalent in the house and Sister Mary Albert was one of the victims. As she had now reached the age of 90 years and 7 months, it is not surprising that her resistance was low. On the afternoon of January 29th she received the Last Sacraments while conscious, and on the morning of the 30th, while the chaplain was distributing Holy Communion on the Infirmary floor, with the Sister Infirmarian, Sister Anna Marie at her bedside, she quietly breathed her last.

The funeral took place on February 1st when His Grace Archbishop Wilhelm concelebrated the Mass with Monsignor A.J. Welsh from St. Joseph’s and Monsignor Bernard Walsh from the Cathedral. Our chaplain, Father Buckley, recited the prayers at the grave.

Sister Mary Albert spoke little of herself or her family, but her loyalty and devotion to her relatives was strong. Their love for her was evidenced by the number who came long distances for her funeral: three nephews, Alexander, Philip, Gribbon, and a niece Mrs. Thomas Carroll from Chapeau, Que., a niece Mrs. Stephen Howard with her husband and son from Scarborough, a niece Mrs. John Oberle and her husband from Hanover, and a grandniece Miss Mary Gribbon from Montreal.

Sister Mary Albert will be remembered in the community for her mild kindly manner, her unobtrusive piety and religious spirit, and her patience in suffering.