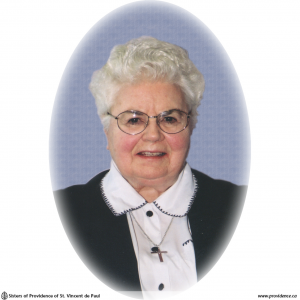 Mary Marguerite Gallagher, the eldest for nine children of Fergal Aloysius Gallagher and Mary Alberta O’Toole, was born on September 24, 1921 in Yorkton, Sask. She attended Mapleside School for Grades 1 – 9 and Sacred Heart Academy, Yorkton for Grade 10. Her Grade 11 was obtained by correspondence courses and help from her mother who was a teacher. She graduated from Scott Collegiate, Regina with Grade 12. From 1940 – 42 she was a student nurse at Providence Hospital, Moose Jaw, Sask. It was there where she met the Sisters of Providence of St. Vincent de Paul. At the beginning of her third year of training she entered the postulancy on January 31, 1942.

Following her profession of vows, she enrolled at the Ontario College of Pharmacy University of Toronto and obtained a Bachelor of Pharmacy in 1947. From September 1944 – April 1946 she apprenticed at Hotel Dieu Hospital, Kingston. She was then assigned to St. Vincent de Paul Hospital, Brockville until 1967. For the following three years she worked in hospital pharmacy at St. Mary’s of the Lake Hospital, Kingston and another three years at Providence Hospital, Moose Jaw. She had to obtain a licence for pharmacy in Saskatchewan by passing the Oral Jurisprudence exam conducted by three examiners. During 1969 – 70 she took a course in Drug Addiction and Alcoholism from Queen’s University, Kingston. Between 1955 and 1960 she was a Member of the Pharmacy Hospital Committee for the Catholic Hospital Association of Canada and the United States representing Canada. She was also involved with various hospital committees.

In July 1973 she left hospital pharmacy to join an International Retreat Group, the Movement for a Better World. She received her basic training in East Aurora, New York and did her apprenticeship in the Minnesota, Nebraska, Seattle and Oregon areas working with teams giving week long parish retreats. The retreat thrust was to build “community” using Scripture and the Vatican II Documents. In 1978 she did the Thirty Day Retreat plus the 9 day Institute followed by the Spiritual Directors’ Workshop at Loyola House, Guelph to qualify to give retreats. Following this she opened the House of Prayer at Providence Hall in Belleville. From 1979 – 1985 she gave preached and directed retreats at the Kermaria Retreat Centre in Pincher Creek, Alberta. For the next two years she worked at Providence Retreat Centre in Kingston. Sister took a Sabbatical at the Galilee Institute in Arnprior during 1987 – 88. She then was assigned as Co-ordinator of Marian I at the Motherhouse.

Sister Mary Alberta was called home peacefully to her loving God on March 12, 2014. She will be remembered for her enthusiasm, cheerfulness and hospitality. Her outgoing personality endeared her to those with whom she worked and to whom she ministered.

The Mass of Christian Burial, held in the Chapel of Mary, Mother of Compassion, Providence Motherhouse on March 18, was presided over by her brother, Rev. Jack Gallagher, CSB accompanied by other members of the clergy. Reverend Msgr. Don Clement delivered the homily.