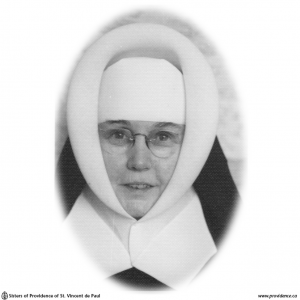 On February 2, 1978, at Hotel Dieu Hospital, Kingston, Sister Mary Alda died in her sixty-second year as a member of our Community, the Sisters of Providence of St. Vincent de Paul.

Born on January 18, 1896, at Bath, Ontario, Mary Gertrude was the youngest of a family of six, whose parents, John McDonald and Jane Frances Meagher, were among the strong props of their parish of St. Patrick’s, Napanee. Mary Gertrude was baptized in this church by Rev. J. T. Hogan. Before she was old enough to remember him, her father died of pneumonia, and her mother carried on the arduous task of managing a farm and educating her six children.

She taught for one year at Wolfe Island before hearing the call of the Master to follow Him in the religious life. And immediately she responded. On August 15, 1916 she entered the Novitiate at the House of Providence and made profession there in 1918 as Sister Mary Alda.

As Monsignor Hanley said in his homily at her funeral Mass Sister, like the prophets of all ages, was given a mandate to proclaim the Lord’s doctrine, and in her case the message was to be the ones Jesus asked to be brought to Him, the little children. For fifty years she carried on her apostolate in the classroom, her special mission being the preparation of the little ones for the first reception of the sacraments of the Blessed Eucharist and Reconciliation.

She taught in Kingston, Trenton, Brockville, Belleville, and Prescott; her longest tenure was in Perth, where she spent three terms, in all twenty-five years. When she retired in 1964, the school board presented her with a golden scroll on an oak plaque. On the same occasion, the inspector at the time, Mr. Dupuis, in paying tribute to her at a meeting of the Ontario English Catholic Teachers’ Association, remarked that she had received an “excellent rating” from every inspector for each of her teaching years; he also presented to her a letter from the Minister of Education commending her for her contribution to education in the province.

To her duties as teacher, Sister was asked to add in Trenton and Perth the responsibility of Superior at the convent.

The years 1968 and 1969 she spent at St. Mary’s of the Lake Hospital, visiting the sick; but in 1970 her health was no longer equal to this task and for her last seven and a half years she was a patient in the Marian Infirmary. Though because of arthritis, from which she had suffered for many years, she was obliged to use a wheel chair, she kept active, assisting at daily Mass and visiting and helping sisters confined to their room.

On January 29th she was at Mass at 10:30 a.m., but in the evening became quite ill and was taken to Hotel Dieu. She lingered for six days, our own sisters remaining with her day and night, and tenderly cared for by the Sisters and nurses of Hotel Dieu. On the lovely feast of Our Lord’s Presentation in the Temple, we like to think that Our Lady presented to the Father the soul of Sister Mary Alda.

In the absence of His Grace, Vicar General Monsignor J. G. Hanley, with Father John O’Neill, pastor of Napanee, concelebrated the funeral Mass.

The only survivor of Sister’s immediate family is her brother Jim of Bath; very many nieces and nephews attended the funeral, among them two Sisters of Providence – Sister M. Therese Doyle of Kingston and Sister Helen Maloney of Rosary Hall, Edmonton, Sister Eileen McDonald, C.S.J., on the faculty of St. Michael’s Hospital, Toronto, and Brother Jim Maloney, Franciscan.