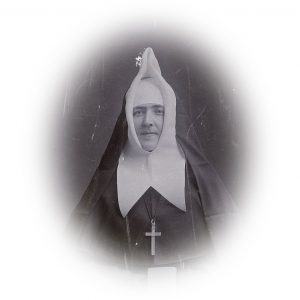 Sister Mary Alexander was called to her eternal reward on July 1st, 1946, the feast of the Precious Blood, at “Heathfield”, Kingston.

Sister died after a lengthy illness which confined her to bed for nearly two years. She, who had been blessed with physical health and mental ability all through life, was now during her last years, like a child, unable to help herself or even conscious of her own sad condition. Yet, withal, she maintained the same sweet, suitable disposition which endeared her to her Sisters and edified the Novices whose duty it was to wait on her and who so faithfully attended to her every want throughout her long illness, night and day.

Her death was the first to occur at “Heathfield”.

She entered the Novitiate at the House of Providence on December 16, 1889. After her profession in 1892, Sister taught in the schools of Kingston, Belleville and Arnprior for 23 years. In 1913 she was elected Secretary General and filled that office until 1933.

She had the happiness of celebrating her Golden Jubilee in 1942, and on that occasion it was said of her by the Community that “she was a careful guardian of its spirit, maxims and traditions, and her kindly example had helped many a member to follow the way of perfection.” Sister was a faithful religious and we trust that her reward is proportionately great.