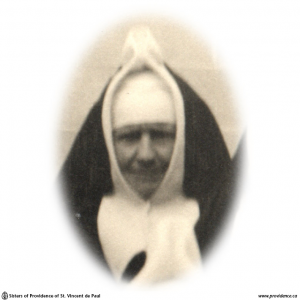 On May 9, 1938, Sister Mary Alexis (Catherine Doyle) died at the House of Providence, Kingston.

Sister was a faithful religious and spent most of her time tending to the wants of the poor, and in charge of household duties. She spent many years at Maryvale Abbey, Glen Nevis. Owing to failing health Sister returned to Kingston a few months before her death.

In the discharge of her duties Sister faithfully applied herself at any work given her. She was a source of edification to her companions, humble, self-sacrificing, prayerful and a model observer of rule. Even when scarcely able she would not allow herself the indulgence of resting longer in the morning than the Community, and never missed being in her place for morning prayer.

Sister had spent thirty-eight years in religion. May her soul rest in peace!

Catherine Doyle entered the congregation as a Tertiary Sister in 1900 and was known as Sr. Ann. Tertiaries were auxiliaries who performed domestic labour and were part of the Congregation from 1895 to 1907, when the program was phased out and they were invited to enter the novitiate. She entered the Novitiate on November 11, 1908.