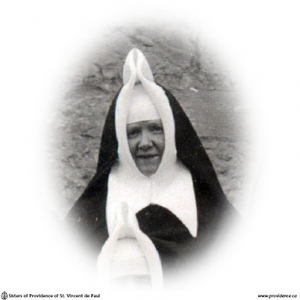 Sister Mary Alfred (Margaret Louise Kilroy) died suddenly at the Marian Infirmary, Heathfield, on May 29, 1966, where she had been a patient for twelve years.

Sister Mary Alfred’s was, what would be called a late vocation; but actually it was late only in the sense that it was impossible for her to respond to the call to religious life until she had reached her thirty-sixth year. Her parents, Martin Kilroy and Catherine Myles were devout Catholics living on a farm at Portage du Fort, Quebec, in the diocese of Pembroke. Margaret remained at home helping her parents to educate an elder brother and sister, and to care for a sister in delicate health. At twenty-three years of age she left home to help a brother to establish a business in Arnprior. After seven years during which his venture had been successful, this brother was stricken with tuberculosis and was obliged to sell his business and go to Calgary in the hope of regaining his health. Margaret accompanied him and remained with him until his death. In possession now of a very good income, she trained as a nurse in the Grey Nuns’ Hospital in Calgary, and then sought to fulfill the desire that had been in her heart since her sixteenth year.

On August 13, 1917, she entered the Novitiate of the Sisters of Providence and made profession two years later. She spent all her active religious life of thirty-two years on the Western missions, Daysland and Edmonton in Alberta, and St. Joseph’s Vocational School, Winnipeg. On all these missions Sister proved herself a good hard-working nurse and a fine religious. She returned to the East in 1951, and remained three years at the House of Providence before coming to Heathfield in 1954.

A patient suffered from arthritis and a failing heart, she spent those closing years of her life in a trusting preparation for the final call of the Master, and the sudden death from coronary thrombosis was not, we feel sure, an unprovided one.

The funeral Mass was offered on May 31, by Father F. Flurey, chaplain at Heathfield, assisted by Father E. Keyes and Father P. McAvoy.