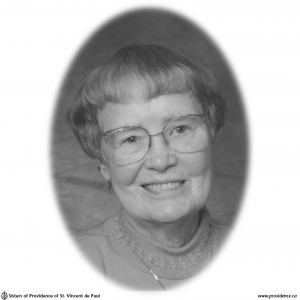 Sister Mary Alma was called home to her loving God on January 14, 2005 at Providence Motherhouse.

Mary Helen Murphy, the second eldest of six siblings, was born in Melrose, Ontario where she grew up on the family farm and attended the local elementary school and later Napanee Collegiate for three years. Mary Helen enjoyed a happy, loving childhood growing up with her two brothers and two sisters – one sister died in infancy. The children took turns helping with the chores around the farm before and after school. One of the cherished times for her was going for the cows early in the morning with the sun shining over the dew covered grass and birds singing in every tree. These experiences filled her with joy and gratitude for all God’s wonderful gifts.

A religious vocation was often mentioned to her by her aunt. She gave much thought to this state in life. During the summer of 1933 she met Sister M. Bibiana and Sister M. Everildis at her aunt’s home in Stoco. Sister M. Bibiana encouraged her to write to the General Superior, Mother M. Ursula right away. Then, with two other young women Mary Helen entered the Novitiate of the Sisters of Providence of St. Vincent de Paul September 15, 1933 and made her first Profession of Vows on August 15, 1935. She was then sent to Maryvale Abbey, Glen Nevis to finish her last year of high school. In September of 1936 Sister M. Alma began the nurses’ training program at Brockville. The following year she developed pneumonia and later was diagnosed with active TB. This ended her nurses’ training and began a year of bed rest at the infirmary at St. Vincent’s. The next year she was sent to Moose Jaw where she was on a modified rest treatment and then began helping in the Medical Records Department. In 1946 she obtained her Medical Records Librarian registration. She worked in Medical Records until 1964. Then she was named Administrator and Superior of Providence Hospital, Moose Jaw and later Administrator of St. Mary’s Hospital, Camrose. During her sabbatical year beginning in 1981 she took the Credo Program in Spokane, Washington. In 1982 she was name Coordinator of the Motherhouse. In 1988 she was assigned to Yale House in Winnipeg to assist with six developmentally handicapped young men. After four years in Winnipeg, Sister was assigned to the Pastoral Care Team at Providence Manor where she remained until she retired to the Motherhouse in 2001. Even in retirement Sister kept busy assisting in the sewing room.

Sister M. Alma was a very prayerful, hospitable and joyful person with keen insight and sensitivity to the staff and patients under her care in our hospital facilities. She always made everyone feel welcome with her warm smile and genuine laughter.

Sister is survived by her sisters, Mary Murphy of Kingston and Bernice Brennan of Belleville. She will be fondly remembered by her sisters, her many nieces and nephews, and by the members of her religious congregation.

The Mass of Christian Burial, held in the Chapel of Mary Mother of Compassion, Providence Motherhouse on January 19, 2005, was presided over by Most Rev. Francis J. Spence, Archbishop Emeritus of Kingston, assisted by other members of the clergy. Her nephew, Rev. John Brennan in his homily, spoke of Sister’s great gift of joy and her profound trust in God and how she was a priceless gift and blessing in her family.