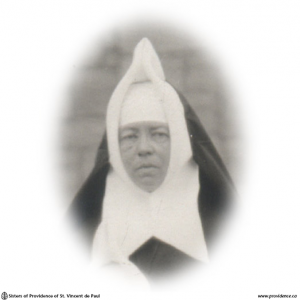 After profession Sister devoted her time to study, and was employed in light duties. Later she went to St. Vincent de Paul Hospital, Brockville, and after training as a nurse, was engaged in the care of the sick for some years.

Recalled to Kingston, she was appointed to take charge of the classes at St. Mary’s of the Lake. Here she found ample scope for her zeal and charity, and faithfully devoted herself to her charges for fifteen years.

One day on the way to her classroom, she was suddenly stricken with paralysis. All that medical skill could devise failed to be of service. She remained an invalid for the rest of her life. This trial she accepted with resignation to God’s designs and for nearly four years her condition seemed unchanged. Suddenly on the afternoon of Sunday she took a weak turn and having received the last Sacraments, died an hour later.