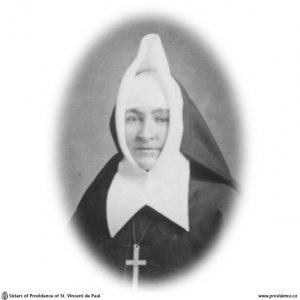 We commemorate today the death of our beloved Sister Mary Alphonsus, who departed this life Sept. 5, 1891, at the age of thirty-six years, and the ninth of her religious life.

Naturally of a kind, upright, and cheerful disposition she set to work with ardour to learn the duties of her holy calling, and to her great delight and satisfaction received the Holy Habit on the Feast of the Presentation 1883, and after the usual probation she was allowed by the Community to pronounce her religious vows, February 2, 1885.

Sister Mary Alphonsus was remarkable for her faithful observance of Rule, and to incite to its practice companions less favoured than herself, she was frequently heard to say, “If we are faithful in small things we shall be faithful in that which is greater.”

She was blessed with extraordinary judgment and great prudence, which qualifications aided admirably in the fulfilment of her charitable labours outside her convent, rendering herself in every way worthy of their confidence the Community reposed in so faithful a subject. In a word, her future seemed marked and promising.

During the brief epoch that recalls her religious life, a more than ordinary share of collecting fell to her lot, and those who accompanied her on these laborious missions, bear testimony to the perfect religious spirit which she always manifested, edifying all with whom she came in contact, by her cheerful manner and interesting conversation.

Sister likewise, passed through the more laborious offices in the Community, particularly that of “cellarist” where the patience of the most enduring is tested, still, she ever preserved her usual gravity and often unpleasant scene was evaded by a good humoured expression or jocose remark.  She laboured zealously in the Orphan Boys’ Department; but with best efforts failed to succeed in the work and while her simplicity acknowledged the want of aptitude her humility prevented discouragement.

Sister Mary Alphonsus was active and robust until two years previous to her death. During the winter of 1889, she was taken ill and suffered much from a persistent cold called “la grippe.” Gradually failing health became visible and she herself apprehended the dread disease consumption, and closely observed its first advances.

Unwilling to give up to weakness and lassitude she earnestly sought employment, and in compliance to this wish she was named infirmarian, which office she held until a few weeks before her death. On Sunday, August 30, it became quite evident to all that the hour of separation was not far distant. The confessor, Rev. Father Spratt, was summoned; but owing to his residence outside the city he did not reach her before Tuesday, when the Holy Viaticum and Extreme Unction were administered.

Having devoutly pronounced her vows; made her act of profession of faith, and asked pardon of her Sisters, feelings of perfect happiness and security seemed to take possession of her soul. A great work was now over, but none too soon, for the following Saturday at 3 a.m. death came suddenly to our beloved Sister. Opening her dying eyes upon those kneeling round her bedside, she earnestly said: “Can this be death?” and with a look full of love as if to bless and say a last “Amen” one feeble sigh was heard and life was gone, the spirit disenthralled had sped on wings of love to the bosom of its God.

Her funeral obsequies were conducted in the usual manner and the remains of our young and much-loved Sister were reverently laid to rest in the convent burial place at St. Mary’s Cemetery.

The name of Sister Mary Alphonsus, is always mentioned with affection due to one, who lived for God alone and served Him to the best of her ability. She devoted nine years to the service of Christ’s poor in the Community, where her memory is so lovingly cherished, and the teaching examples of her fervour, charity and self-sacrifice, will long be recounted as a service of edification and encouragement. Ah! May we never prove ourselves unworthy of companionship with this dear and generous soul.