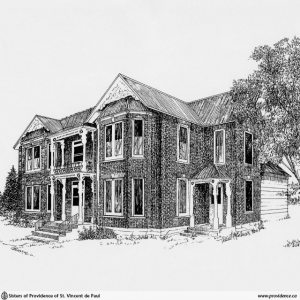 As the writer repeats this name, she thinks of a beautiful soul embellished by nature with many virtues, childish simplicity, charming manners, kindness of heart, sympathy for the afflicted, great generosity, readiness to assist where help was needed. These, with many other natural gifts were observed in the young neophyte, shortly after her admission into the Providence Novitiate.

Born in Williamstown June 24, 1862, of French Catholic parents, she was educated by the Sisters of the Congregation of Notre Dame, who at that time had a flourishing Boarding School in the town. On May 12, 1881, being then over 18 years of age, she entered our Novitiate. A child of predilection, she devoted herself without reserve to the duties of her new life and especially to the beck and call of her Superiors. Happy in her Vocation, she seemed to communicate that spirit to those around her by her cheerfulness, her gentleness, her kindness and thoughtfulness for others. Though naturally gifted, capable of many things, she took her part in the laborious works of the House, often doing more than her strength permitted. She received the Holy Habit February 6, 1882, and made Holy Profession November 22, 1883.

The reader may ask how she was employed after. We might say truthfully, How was she not employed? She invariably had several offices. She was organist, had charge of the Chapel, was visitor of the prison, made other visits outside, and had minor duties to attend at the same time. Any free time she had, she devoted it to drawing and painting – her decorations of the altar were always admired, her selections of music very refined, her paintings, the touch of an artist. So useful, she seemed a necessary adjunct to the Mother House. Other Sisters were sent on Mission and recalled: to move Sister Mary Amable – apparently was never thought of.

But a surprise came to her and to many. Sister was named for St. John’s Convent, Perth, July 9, 1902 – Assistant to the Superior and Music Teacher. She could scarcely believe that this was to take place – that after twenty-one years engaged in every kind of work at the Mother House, she should be confined to the special work of teaching on mission.

However, she bowed in submission to the will of God, thus made known to her, and started for her new abode. Here in Perth, the old convent was no longer habitable at least for the Community. They had planned to build a new convent. Permission had been granted for the Sisters to begin the work, and the parish would assist in the payment. Sister May Amable entered wholly into the work of soliciting. With another Sister she travelled over the country and town taking subscription and promises of various kinds. There was very much work in connection, but eventually the new building was erected and later paid for.

When the Superior, Mother Francis was appointed to the new mission, Prescott, July 1905, and Sister Mary Amable named to take her place as Superior of St. John’s Convent, Perth, there was no limit to her zeal and ambition.

Besides the new responsibility, she still retained the music class as well as that of organist in the church, which was no light charge as there were many Requiem Masses. The result was, after some time, her health failed, she broke down completely, had to be brought home and relieved of all care. She was poorly for a long time, in fact never really recovered her former robust health. She was ever after, restless, uneasy. After some time she recovered somewhat, was able to go about and take an interest in things generally. She resumed her painting and light duties.

In July 1907, at an Assembly of the General Chapter, she was elected General Secretary. Very soon it was observed, she was not able for the close application necessary to this office, she could not continue.

The next year she went to Arnprior to assist the Sisters in preparing for the Golden Jubilee of the Pastor, Rev. Father Chaine. Very successful indeed, she received many compliments and much praise. The following year she was named Superior of that Mission. She returned to the Mother House the following year.

In 1912 when the mission of Glen Nevis was opened, she was appointed the First Superior, was also music teacher and teacher of French in the schools. At the end of two years she asked to be relieved of this responsibility. Later she was given charge of the music class in St. Michael’s, Belleville. After the death of Sister Mary of the Nativity, Superior of the Trenton mission, Sister was appointed to that mission – which office she held until her appointment to Chesterville the closing scene of her life.

How often a day of rejoicing is turned into one of sadness and mourning. Such was for the Sisters of St. Mary’s Convent, Chesterville, on that eventful day, November 23, 1922, the feast of the Superior General, Mother M. Clement. The Superior herself was away in the West visiting the missions, was then in Moose Jaw. She had written some time before, that she could not be home, but for the Sisters to enjoy themselves, make merry, and have a good time on the feast. This message being communicated, all in the several mission availed themselves of the privilege.

In the mission of Chesterville where four Sisters reside, they spent a very pleasant and joyous evening. The latter part they had employed in making knickknacks for the church bazaar which was to be held the following week. A few minutes before ten o’clock after making their “visit” they all went up to their rooms.  It was noticed that the Superior went down again, as was often her wont, to see that all was safe, or for some other purpose.

A little later one of the Sisters hearing groaning, she called her companions, and went down to find their beloved Superior lying unconscious in a heap on the furnace floor, a hot water bottle and other things she was carrying, strewn about her. Summoning Patrick the man, they succeeded with his aid in carrying her to the next floorwhere they laid her on a couch just outside the chapel. The priest and the doctor were called immediately – the former, Rev. Father Staley was there in a few moments, and anointed her, as it was plainly visible that death was near, the doctor concurring in this belief. All was over at eleven o’clock. The spirit of dear Sister Mary Amable had taken its flight to her God.

At the Mother House, what was our surprise and grief the next morning to hear from the Night Sisters the strange message that had come, – no particulars given – that Mother Assistant and Mother Gabriel had gone at once on the midnight train to the scene. (At first the Rev. Pastor wanted the details of her death kept secret), which of course, could not be done.

We tried to pray. We asked our chaplain to offer the Holy Sacrifice of the Mass for our dear Sister. We waited eagerly for a second message. Finally we telephoned the Convent to learn that the remains were on their way to Kingston, that Requiem High Mass had first been offered by Rev. Father Staley – that Mother Assistant would give us full particulars.

The remains of our loved Sister reached the Providence at 4.15 p.m. Friday, November 24. In stole and surplice Rev. Father Hyland met them, and after sprinkling with Holy Water, and saying prayers, he began the Rosary.

Many of the Superiors and Sisters of the missions came on Saturday and Sunday. The funeral was on Monday November 27. Masses were offered by Father Keaney, Chaplain, Rev. Msgr. McDonald of Glen Nevis, Rev. Father Staley, the last a Pontifical High Mass of Requiem by His Grace Most Rev. M.J. Spratt, D.D. There were twelve priests in the sanctuary.

Who would ever think that our dear Sister Mary Amable, who had been going about so many years early and late on errands of mercy and charity should eventually meet death in this way?  But as sudden death is not always to be dreaded, we can only hope that in her case it was a Blessing in disguise. Grant her eternal rest O Lord, and let perpetual light shine upon her. May she rest in peace, Amen.