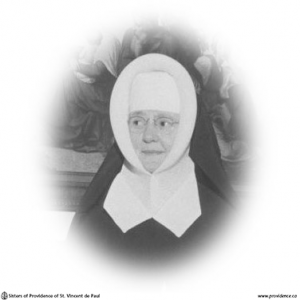 Sister Mary Amable died Wednesday afternoon, October 10th at the Marian Infirmary, “Heathfield” after an illness of three months. Mary Margaret Truaisch was born in Belleville, Ontario, the eldest of seven children of Mr. John Truaisch and Florence McInich, and received her education in St. Michael’s School and Collegiate, Belleville.

She entered the Providence Novitiate on September 15th, 1925. After her profession Sister M. Amable assisted in the printing room and Guardian Office, House of Providence. While in this department she devoted much of her time and talent to painting and art, a work necessary and often in demand at the printing office. At this time her health was precarious, and a change of climate was suggested before she came to “Heathfield” in 1933. After a few months however, she began to improve in new surroundings and the idea of sending her West, as first thought of, was abandoned.

It was in those early days at Heathfield that the idea grew of starting a department for the making of church vestments, etc. The need seemed urgent for such an undertaking in the diocese, and with the advice of the late Rev. M. J. Brady who was then chaplain at the Mother House, and who gave the enterprise his unstinted encouragement and support, the Vestment Department as it is known  today was begun. From its very beginning Sister M. Amable had been in charge, and through her untiring efforts this department has been successfully maintained down the years.

Sister had many sterling qualities of mind and heart, and was endowed with remarkable ability and artistic skill. Although never robust and often physically indisposed she accomplished much and was never retarded in her work by illness. Her affability and generosity were characteristic assets of which our devoted Sister M. Amable made good use as a faithful member of the Community. It was given her to fulfill, as it were, “a long life in a short time.” To attain this it cost her long months of intense suffering from cancer, which she accepted with admirable resignation and bore patiently to the end.

Solemn Pontifical Mass was offered by His Grace Archbishop O’Sullivan on Saturday morning at 9:30, in the presence of a large number of relatives and friends, including priests and religious. In attendance at the Mass were also four sisters and two brothers, including Chief Truaisch of Kingston.

A large concourse attended the funeral which was honoured by city officials, and officers of the police department posted enroute to St. Mary’s Cemetery where burial took place. Rev. Fathers Carley and Flurey recited the prayers at the grave.