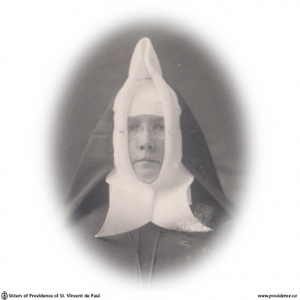 Sister Mary Ambrose died on Friday morning, November 9, 1951, after an illness of about two months, caused by a cerebral haemorrhage.

She was the former Mary Fitzgerald, born in Tyndenaga, Ontario, of parents who were among the early Irish settlers of the place. She was quite young when she entered the House of Providence Novitiate, May 1st. 1888. In 1890 she made profession and was sent on her first mission to Holyoke the same year, returning in 1892 at the time of the “separation.”

Except for seven years at St. Vincent de Paul Hospital and a few years local Superior of St. Mark’s Convent, Prescott, she spent practically all her religious life at the House of Providence. Here she was General Treasurer of the Community for three years.

Apart from this her principal charge was taking care of the Priest’s breakfast room. In this department her kindness to the clergy had become a tradition. On the occasion of her diamond jubilee celebration in 1949, His Grace the Archbishop publicly referred to it and pronounced on her the following eulogy: “She goes back to the memorable days of Archbishop Cleary, and has had the privilege of serving under all the Archbishops of Kingston. In her quiet way she has symbolized all that is best in the traditions of the Sisters of Providence; she has been one of the Community’s best ambassadors of good will.”

She had been the senior Sister of the Community for several years and was one of its most beloved members.

Among her relatives can be counted six cousins, priests, four cousin nuns and a niece.  Rev. M. Murphy, O.M.I., a cousin, attended the funeral.