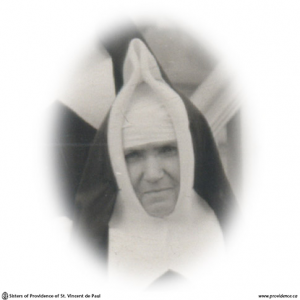 On Saturday morning, September 9th, 1946, Sister Mary Amedia (Catherine Walsh) died at the House of Providence, Kingston, after an illness of fourteen years.

She was a native of Castlebar, Ireland, and had been for some time in Canada prior to her admission to the Community. Sister entered April 17, 1896, and with the exception of a few years at St. Mary’s of the Lake, she spent most of her entire half-century of religious life ministering to the aged poor and infirm at the House of Providence.

She was a faithful, devoted worker, and would give one the impression that her idea was “to give and not to count the cost”. God, however, demanded of her another sacrifice, entirely opposite; the complete surrender of herself to a life of inactivity and suffering. For fourteen years she remained helpless and bed-ridden. Towards the end her sufferings increased, and for want of circulation her feet became so sore and the pain so unbearably great, that she was forced to cry out for mercy and relief. God heard her prayer, and her purified soul and ailing body found relief in the peaceful repose of death.

Sister had spent fifty years in religion. May her soul rest in peace!

Catherine Walsh entered the congregation as a Tertiary Sister in 1895 and was known as Sr. Catherine. Tertiaries were auxiliaries who performed domestic labour and were part of the Congregation from 1895 to 1907, when the program was phased out and they were invited to enter the novitiate. She entered the Novitiate on November 21 1907.