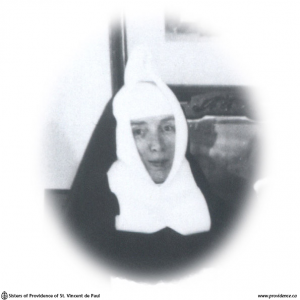 Mary Myrtle McCormick, daughter of John McCormick and Margaret Mooney, was born December 7, 1891, in the rural parish of Erinsville. On the day following her eighteenth birthday, the feast of the Immaculate Conception, 1909, she entered the novitiate of the Sisters of Providence, and pronounced her first vows on January in 1912, as Sister Mary Anastasia.

Apart from a few years at St. Vincent de Paul Hospital, Brockville, Sister’s long religious life was devoted to the care of the aged, the infirm and the poor at the House of Providence, Kingston. The comment of one man, when he learned of her last illness, could be repeated by many who knew of her work. Mr. Cain, our undertaker, said of her. “I believe she is a saint. I have taken dozens of her patients by ambulance from the Providence to the hospital, and I marveled at her patience and kindness with these aged and querulous persons; I never once saw her cross or impatient with them.”

And Sister might have been excused for being impatient at times, for from her early years in religion she carried a heavy cross. Young and in excellent health, in the days when there were no automobiles, she was sent with a companion on a collecting tour through the country parishes. The Sisters were being driven in a high two-seated “democrat” wagon, when their seat came loose and the two Sisters were jolted to the ground. Sister Mary Anastasia received a head injury, and from that time on she suffered constant and at times frequent epileptic seizures. This was a severe blow to a young energetic woman, but Sister did not let it curtail her interest in or her devotedness to her patients. It was not until 1958, after forty-nine years in religion, when as a result of a fall she suffered a fractured ankle that she retired to the Mother House infirmary. In 1962 she celebrated the Golden Jubilee of her profession.

Sister had always had an ardent devotion to Our Lady under the title of Mary Immaculate. She commenced her religious life on the feast of the Immaculate Conception, and throughout that long life she strove constantly to enkindle in those with whom she worked some of her own love for Our Immaculate Mother; even in her retirement she continued to propagate devotion to Mary through the wearing of the Miraculous Medal. It was not, then, surprising that God called her home on Saturday, Our Lady’s day.

On November 29th, she fell in her room for the second time fracturing a leg. She was in hospital for ten days, and when she returned to the Mother House she was helpless, but her nurses all spoke of her as a wonderfully cheerful patient, making the fewest possible demands on them and their time. It was evident, though, that her lungs were becoming congested, and that she had not long to live. She received the Last Sacraments and during the night of Saturday, December 28th, with Sister Mary Alban and Sister Margaret Meraw at her bedside, she quietly breathed her last.

In the absence of His Grace Archbishop Wilhelm, Monsignor Bernard Walsh, rector of the cathedral, Father Buckley, Chaplain, and Father Vickers concelebrated the funeral Mass. No members of her immediate family survives, but several nephews and nieces from Kingston, Napanee, Deseronto and Peterboro attended the funeral and four of the nephews acted as pall-bearers. A grand-niece, Sister Sharon McCormick, a student nurse at St. Mary’s Hospital, Montreal, was also present.