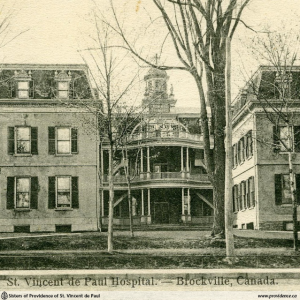 When we consider the life and death of many persons, even of our own dear Sisters, we are impressed with the truth of these words, “Through many tribulations must we enter into the Kingdom of God”. Heaven is not reached without struggle, without suffering of mind or body or of both. To some are granted many long years of continued labour and struggle, to others but a short space of time is given for activity, to be supplemented by years of much physical suffering, to others again the time of labour and suffering may be proportionately divided, but for each and all, the prize must be won.

Sister Mary Angelica laboured in the Institute nearly twenty-five years. Never very robust, being of a delicate frame and constitution, she was nevertheless very wiry. Her early years were spent at the Mother House. She laboured in the different offices, in the kitchen, dispensaries, the wards, always manifesting much interest and generosity everywhere, at the same time exhibiting a kindly and charitable spirit in the communication with others.

She spent several years on mission, serving satisfactorily in Brockville, Smith Falls, Trenton and lastly in Tweed. In the latter part of 1924 she began to complain of not enjoying her former good health. The first of June 1925, she came home from Tweed being somewhat alarmed about her condition. She had many small growths on her breast and body, which first appearing like pimples were increasing in size and of late beginning to give trouble. Doctor Gibson seeing her advised her to come to the Hotel Dieu, and he would remove them. This was done. It was feared however, the disease was general and would break out again, which proved only too true.

It was not long before it appeared in the arm and shoulder. The arm became much swollen, as did the whole side of the body. The disease advanced rapidly.

In January 1926 she was anointed, not that there was any immediate danger of death, but she had become so reduced, she was unable to fast until the hour of Holy Communion

Just here we should speak of the goodness and mercy of Our Dear Lord. Though her disease was not offensive, she was cared for so attentively and well by Sister Mary Dominic and Sister Mary Anastasia, that a visitor could not discern anything more than any ordinary sickness. Holy Communion was brought to her every morning. Her every desire was satisfied. Contrast this with a person in the world in a similar condition. How thankful we should be to God!

Sister appreciated the great favours she enjoyed and frequently expressed her gratitude to God and to her Sisters who were so self-sacrificing in her regard. She manifested much patience in her sufferings.

She lived on from month to month, apparently there was not much change in her appearance, but, no doubt the disease was steadily advancing. In the spring of the next year 1927, she began to fail very perceptibly. It was thought she would not survive the month of June. She did however, but was considered in a very low condition. On the First Friday in June she took a weak turn. The Sisters were assembled and prayed long, thinking that the end had come, but she again revived. During the night or rather at 2 o’clock in the morning Saturday, June 4, 1927, Our Mother General and Sisters were again called – they remained with her until morning. Reverend Father Coyle offered the Holy Sacrifice of the Mass for her at 8 o’clock. She lingered on until noon, passing from this world at twenty minutes past twelve o’clock.

Sister had many spiritual advantages, Masses, Holy Communions, Prayers. Surely we cannot but hope she soon reached her eternal home. Had she lived until August she would have been 45 years of age.

The funeral Mass was on Pentecost Monday. Solemn Pontifical Mass was offered by His Grace Most Reverend M.J. Spratt, D.D. at 8 o’clock assisted by Rev. Father Black of Peterborough, and Rev. Father Leacey.

Lilian Blanchfield entered the congregation as a Tertiary Sister in 1897 and was known as Sr. Nora. Tertiaries were auxiliaries who performed domestic labour and were part of the Congregation from 1895 to 1907, when the program was phased out and they were invited to enter the novitiate. She entered the Novitiate on November 21 1907.