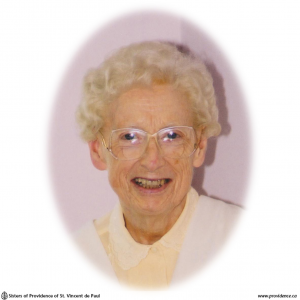 The late Sister M. Angeline was born in Kitley Township, in the county of Leeds, January 5, 1916, the tenth of twelve children born to Francis Garvin and Maria Bissonnette. She began her early education at the age of seven at the local rural school. Her father was a farmer and although they never lacked for food and clothing, they were not well off.

Her father died June 11, 1930, when Loretta was fourteen, the result of an accident with the horses, leaving her mother with five children under the age of twenty. An older brother who had been working in the United States returned home and bought the farm. So her mother and the five youngest children moved to Westport. The following spring her mother bought a farm closer to Smiths Falls. The family moved there, Loretta remained in Westport with cousins in order to complete the school year. But when an older sister became ill and was brought home, Loretta left school and went home to help her mother. While she was in Westport the C.N.D. Sisters invited her to consider entering their Congregation. However, she was not interested stating that she did not want to be a teacher.

She made Profession August 15, 1935, and was sent to Glen Nevis to finish her high school education. At the end of Grade 12 she won a scholarship to Brescia College, but was not allowed to use it. After graduating from the Ottawa Normal School in 1939, Sister M. Angeline taught for thirty-four years in the Catholic schools in Gananoque, Kingston, Apple Hill, Belleville, Arnprior, Smiths Falls, Trenton, Montreal and Brantford. During this time she was principal of Holy Rosary School, Belleville and St. Peter’s School, Trenton. She obtained a Bachelor of Arts degree from Queen’s University, Kingston, and her High School Assistant’s Certificate and took a course in vocal music.

When Sister retired from teaching in 1973, she went to Prescott to do the cooking. The following year she took a pastoral care course in Ottawa and was then sent to St. Mary’s Hospital, Camrose, Alberta, to minister in pastoral care. She also took a course in electrocardiograph so that she could take the electrocardiograms. She enjoyed this work very much and would have liked to continue in it but, in 1976 she was sent to Tweed to do the cooking for the Sisters and the pastor, Father Dan McDonald, who went to the convent for two meals a day.

In 1977, she returned to the West to work in the office at Rosary Hall in Edmonton. In 1980 she went to St. Joseph’s Hospital, Edmonton, to work as a ward clerk on the fifth floor. She took a sabbatical from September 1985 to July 1986 and went to Gonzaga University, Spokane, Washington, where she took several courses in Scripture and Psychology. She returned to St. Joseph’s Hospital where she did pastoral care work and took charge of the chapel from 1986 to 1991.

In September 1991 Sister came to the Motherhouse to work in the Archives. She was forced to retire from this ministry in 1999 due to ill health.

Sister was a woman of many talents that she used in the various ministries of the Congregation and generously shared with others. She will be remembered for her friendship and support. She was admired and loved by her family and especially by her nieces and nephews.

Sister M. Angeline, who is predeceased by her parents Francis and Maria (Bissonnette), her sister, Mary Cecilia, Evelyn (Vice), Margaret (Sr. M. Mercedes), Josephine (Mallete) and Aurelia and her brothers, Bernard, John, Alphonsus, Gerald and Leonard, will be dearly missed by her sister, Irene, and sister-in-law, Rose, as well as by her many nieces and nephews. She will be fondly remembered by the members of her religious congregation as well as by her other relatives and friends.

The Mass of Christian Burial, held in the Chapel of Mary Mother of Compassion, Providence Motherhouse on October 31st was presided over by Msgr. Thomas Raby accompanied by her cousin, Rev. Gerald Donovan of the Scarboro Foreign Mission and other members of the clergy.