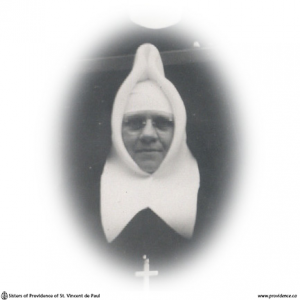 Sister Mary Angelus died at St. Vincent de Paul Hospital on Wednesday morning, October 31, 1951, after an illness of about two years. During this time everything had been tried in the hope of affecting a cure, but God willed otherwise and she accepted the inevitable with resignation to His will.

Mary Isabella Holland as she was known was a native of Marmora, Ont. She obtained admission to the Novitiate in August 1916 and made profession in 1918. She then went to Moose Jaw and trained as a nurse at Providence Hospital where she remained for a number of years after graduating there.

Returning to Kingston in 1942, Sister was appointed to St. Vincent de Paul Hospital as the Lab. Technician, etc. and served in that capacity for some time previous to her illness. She was a faithful religious, cheerful in her work, kind and charitable to the sick – admirable qualities which were much appreciated by her patients, as evinced in the wide spread regret at the news of her death.

On Thursday afternoon the remains were taken to Kingston and the funeral was held on Saturday morning from Our Mother of Sorrows Chapel, House of Providence. His Grace Archbishop O’Sullivan officiated. Burial took place in St. Mary’s cemetery.

Before leaving Brockville, Mass was offered at St. Vincent’s on Thursday morning for the repose of her soul.