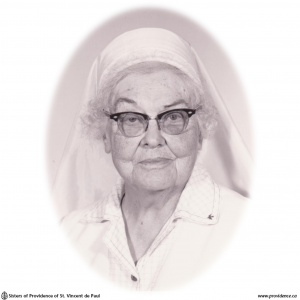 Barbara Lucille Collins, the daughter of William Collins and Mary Ellen McCann, was born on July 26 in Tweed, ON.

William Collins immigrated to Canada from Letterkenny, Ireland with his parents who settled on a farm on Sugar Island, Ontario, with their eight children. William later married Mary Ellen McCann from Tweed and became a merchant in that town. Of their six children, Margaret (Sister M. Barbara) entered the St. Clare Monastery in Mission, B.C., and Barbara Lucille the Sisters of Providence.

Barbara Lucille made first profession on August 27, 1926, taking the name of Sister M. Anita. Sister completed her high school education at Maryvale Abbey, Glen Nevis. She took a course in liturgical music from the Pius X School before going to Teacher’s College in Ottawa. To further prepare herself for teaching, Sister took three courses in Catechetics, drama at Queen’s, home economics, vocal music, arts & crafts, audio visual methods and modern math. She obtained her principalship from the Ontario Teachers’ Federation. In 1969, she was awarded a Silver Anniversary Certificate of Recognition on the occasion of the Twenty-fifth Anniversary of the Ontario English Catholic Teachers’ Association. Sister Anita taught in Belleville, Perth, Arnprior, Smiths Falls, Trenton, Tweed, Gananoque and Kingston – a total of 38 years.

Sister worked at Rosary Hall in Toronto for a year before going to St. Mary’s of the Lake Hospital to do pastoral work, where she worked until her retirement to Heathfield in 1989. While at St. Mary’s, she gave great witness and diligent service as a pastoral care provider and taught, by her witness, the young and the old.

The “Love of the Lord” permeated her being. She not only provided care in the hospital but also visited many patients in their homes and had the gift of being able to reach out to others in a warm, delightful way. While at St. Mary’s, she was also the spiritual director of the Legion of Mary.

Sister M. Anita went about doing good in a gentle, gracious, quiet, warm and diligent manner and, at times, did shopping for shut-ins who were ex-patients of St. Mary’s. Because of her great sense of humor, and being a “people person”, she brought much joy to those whom she visited. Sister faithfully visited the Sisters in Marian II after her retirement to Heathfield in 1989.

Sister M. Anita died on January 12, 1993, in the 69th year of her religious life. The funeral Liturgy was celebrated by Archbishop F.J. Spence, accompanied by several priests. Rev. K. P. Stitt delivered the homily. Several of sister’s nieces and nephews joined in the celebration of her life. Though her sister, Sister M. Barbara, could not be present for the ceremonies, she was present in spirit and with prayer. Sister sent a message of her deepest appreciation to the Sisters who cared for Sister M. Anita in such a loving and caring way during her last illness.