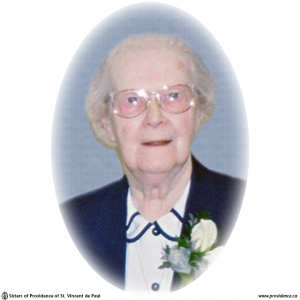 Margaret Mary Kelly was born in Regina on May 20, 1923, the third of five children of Rose Ann Beesley and John Kelly. Since her father was an officer with the RCMP, the family moved frequently. From Regina where she was born, the family was posted to Saskatoon, Winnipeg, Weyburn, Yorkton, Calgary and Edmonton. Because of all these moves the family was called “the Kelly gypsyclan”. She received her early education in many different schools and graduated from St. Mary’s High School in Edmonton in 1941. She then began training as a nurse at the Edmonton General Hospital but, because of poor health she had to withdraw. She attended the McTavish Business School and began work at the Wartime Prices in the Food Rationing Department that had been set up during the Second World War.

She entered the novitiate of the Congregation of the Sisters of Providence of St. Vincent de Paul in Kingston on August 15, 1945. In 1947 following her first profession, at which time she received the name Sister Mary Anna, she began training as a nurse at St. Mary’s Hospital in Montreal. But due to ill health she withdrew from the School of Nursing.  For the remaining of that year she was transferred to the Father Dowd Home in Montreal, then to St. Vincent de Paul Hospital in Brockville and finally to St. Mary’s of the Lake Hospital in Kingston. In 1948 she was sent to Providence Hospital, Daysland but in February of 1949 she was admitted to the T.B. Sanatorium in Edmonton After a short stay there, she went to St. Joseph’s Hospital to recuperate. She made her Final Profession on August 15, 1950 in the chapel at St. Joseph’s Hospital. In 1952 she went to Moose Jaw and began correspondence courses for a Medical Record Librarian and completed them in 1953. She was registered as a Canadian College of Health Records Administrator in the Canadian Association and in the Alberta Association of Record Librarians. In 1956 she set up the first record room at St. Joseph’s Auxiliary Hospital, Edmonton.

From 1956 – 1976 she worked in Medical Records at St. Joseph’s Hospital, Edmonton, St. Mary’s Hospital, Camrose, Providence Hospital, Daysland, and St. Anthony’s Home, Moose Jaw. From 1976 – 1988 Sister Anna worked in Medical Records, at the switchboard and as an Admitting Officer at St. Joseph’s Hospital in Edmonton. In 1988 she went on sabbatical, ending the year with a six-week Pastoral Care Course in Ottawa. She then returned to Camrose to work in Pastoral Care until 1994, when she went to Rosary Hall in Edmonton.