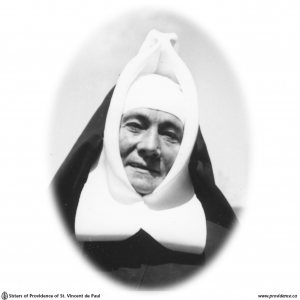 Sister M. Anna died on Tuesday evening, April 2, at St. Francis General Hospital, Smiths Falls. Sister had been in delicate health for some years previous, although hopes were held out for her recovery. A few weeks ago she suffered a serious relapse to which she finally succumbed.

Sister M. Anna, the former Bridget W.A. Kinlin, was born at Bogart, Ontario. Her parents were the late Stephen Kinlin and Ann Whelan, highly respected residents of that locality and noted for their sterling Catholicity and deep faith. She entered the Novitiate of the Sisters of Providence in Kingston, which was then located at St. Mary’s of the Lake, on December 8, 1912. After her profession in January 1915, she was appointed to St. Francis  General Hospital, Smiths Falls. At St. Francis, Sister applied herself generously in every charge and was so interested and helpful in the general management of affairs at the Hospital, that she seemed indispensable and essentially a part of that institution for many years. Thus had she spent her whole religious life in devoted, loving service of the master.