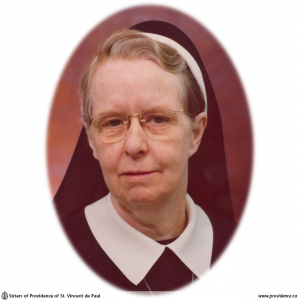 After a long and fruitful life, Sister Mary Annette died August 29, 1999 at Providence Motherhouse. She was eighty-eight years old.

Anne Mary, daughter of John Kennedy and Mary Elizabeth (Williams), was born in Belleville, Ontario, November 14, 1910. Her father, a soldier in World War I, is buried in Belgium. In 1919, Anne Marie’s grandmother, Mrs. Michael Williams, bought a house at 198 Coleman Street in Belleville for herself, her sister, as well as her two daughters and their children. This group included Elizabeth Kennedy and her children, Anne Mary and her younger brother, Michael Leo, who in time married Georgina Flindall. Leo died in 1967.

The home on Coleman Street became a stopping place for members of both the Williams and Kennedy families. The extended family maintained close contact through the years. Beginning in 1975 family reunions were held every five years. Research into genealogies led back to Limerick and Mayo in Ireland.

Living in Belleville, Anne Kennedy had many contacts with the Sisters of Providence of St. Vincent de Paul. As a pupil at St. Michael’s Academy, she was taught by Sisters Mary Augustine, Loyola, Clara, Borgia and Edward. She took piano lessons from Sister Mary Lourdes, and belonged to the Children of Mary under the direction of Sister Mary of the Sacred Heart.

After graduation from Belleville Collegiate Institute and Vocational School, Anne attended Ontario Business College and did office work for two years at a salary of ten dollars a week. Subsequently, she attended Peterborough Normal School and began teaching for a salary of five hundred dollars a year.

With the encouragement of Sister Mary Borgia, Anne began to consider a vocation as a religious Sister. She expressed a desire to work as a missionary but Archbishop O’Brien convinced her that she would be very much needed in the Kingston diocese.  Consequently, on February 15, 1935 she, along with Winnifred Whalen, Kathleen Maguire and Phyllis Genore entered the Novitiate. All four persevered to celebrate together their Golden Jubilee in 1985. When Anne entered there were a total of thirty Novices in the novitiate.

Entering on a Friday, Sister Kennedy found herself in a classroom on Monday morning as a supply teacher. This continued until 1937, when having become a senior novice, Sister began teaching full time at St. John’s School, Kingston. She obtained her B. A. from Queen’s University and her B.Ed. from Toronto University. She also had a certificate in manual arts and taught shop to the boys at St. John’s School and to the auxiliary class at St. Mary’s School, Kingston. Sister’s teaching career in Kingston and surrounding area spanned over forty years. In addition to her work in the classroom while at Nicholson College, Belleville, Sister moderated the student council and coached the boys’ baseball, hockey and football teams there. At her wake a beautiful floral arrangement sent from “her boys” after so many years, attested to the influence she had on their lives.

After Sister’s retirement from teaching in 1978, she spent a sabbatical year at St. Michael’s College in Toronto studying theology. She took a course in canon law at St. Paul’s University in Ottawa, and then worked on the Marriage Tribunal in Kingston for a time. Sister also studied journalism and did a good deal of writing. She served as a pastoral care visitor until ill health forced her to retire to the Motherhouse.

In his letter of recommendation at the time of Sister’s entrance into the congregation in 1934 Monsignor Nicholson spoke of Anne Kennedy’s “splendid character and deep piety.” These qualities were nourished by Sister throughout her life. She was known for her strong fidelity to the laws of the church, as she understood them, and she impressed others by her deep devotion to Jesus in the Blessed Sacrament.

She is survived by her sister-in-law, Mrs. F. Kryschuk of Belleville, Ontario and by several nieces and nephews, as well as by many cousins. At her request the wake service in the Motherhouse chapel was kept very simple.

Archbishop Francis Spence, assisted by several members of the local clergy, including some who boasted of being a former pupil of Sister M. Annette, presided at the Mass of Christian Burial held in the Chapel of Mary Mother of Compassion. The chapel was filled by Sister’s extended family, friends and Sister of Providence. Father John Brennan, the homilist, emphasized Sister’s great devotion to the Real Presence of Christ in the Eucharist. The whole purpose of her life was to live fully the truth of this mystery. “Her life,” he said, “was a gift to the church, to her congregation, and to all who know her.” He ended by reciting Sister Mary Annette’s favorite, devotional community prayer, “Eternal Praise and Thanksgiving be to the Most Holy and Adorable Sacrament of the Altar.”