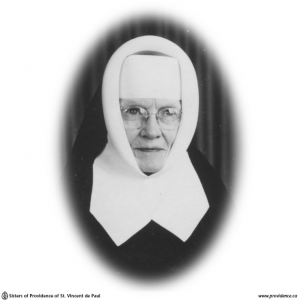 In 1948 she became again First Assistant to Mother Victoria and on the latter’s sudden death in February 1950, she acted as Superior General until the General Elections in July.

She was then assigned the superiorship of St. Joseph’s Hospital, Edmonton, and during her six years there added two floors to the hospital. In 1956 she came East to observe the Golden Anniversary of her profession and for three years after served as Local Superior of St. Michael’s Convent, Belleville. Her health was now beginning to fail but she continued for four years, first at Dowd Home, then at St. Mary’s of the Lake and the House of Providence to visit the patients and pray with the dying. In 1963 loss of memory obliged her to retire to the Motherhouse. The first couple of years of retirement were painful ones when she required close surveillance and restraint as habits of a very active life were no longer guided by calm reasoning; but gradually the restlessness disappeared and she became again the kindly, quiet and humorous Mother Anselm we had known for so long.

While she had been not as well as usual for a few days, her death came rather suddenly. On June 3rd she ate her customary light breakfast, but as the nurses came in to do her up for the day, she became very sick and they knew the end had come. Father Buckley was called and came at once, gave her absolution and the Apostolic blessing (she had received the Sacrament of the Sick a few days previously), and recited the prayers of the ding. The infirmary staff and several other Sisters were with her as she quietly breathed her last.

His Grace the Archbishop was absent and the funeral Mass was concelebrated by Monsignor J.G. Hanley, vicar General, Monsignor Welsh and Father Buckley. Msgr. Hanley delivered the homily, a sincere tribute from one who had known Mother for many years.

Mother’s sister, Mrs. Janet Sammon, a resident at the House of Providence, was present for the funeral along with several nieces and nephews. Two Sisters of St. Joseph from the Motherhouse, Willowdale, Ontario, came to represent Mother’s only other sister, Sister Remigius, who at 89 was unable to travel.

Excerpts from three letters found on Mother Anselm’s personal file give some indication of how she was regarded in the business world, the religious community and the church in general.

Mr. Logan V. Gallagher, Architect of Kingston wrote: “I am sure you look forward to this coming Saturday (the day of the General Community Election) with a mixture of relief and satisfaction; of relief, knowing that the responsibilities which have been yours to carry for the last few years will soon be lifted and transferred; of satisfaction, knowing that these responsibilities have been so capably handled. It has been a great personal pleasure and inspiration to me to work for and with you. I very much appreciate having had this opportunity…”

Father G.J. Ehman, ESSR, and Provincial, in thanking her for directing a young boy she knew to the Redemptorist novitiate made this remark: “Eternal apostle that is what you are, with an enthusiasm as quiet as it is effective…”

His Grace Archbishop O’Sullivan, Ordinary, during most of Mother’s years in Kingston, sent her this message: “Your term of office is rapidly drawing to a close and may I heartily congratulate you on the splendid manner in which you have discharged the very serious responsibilities of the Superior Generalate and the evident progress of your community during the years of your administration. I am sure the Sisters will always hold you in great veneration as a wise, prudent and loving Mother General, one of the great women of your Community. As Archbishop of the diocese, I gladly salute you with the evangelical encomium: “Well done, good and faithful servant.”