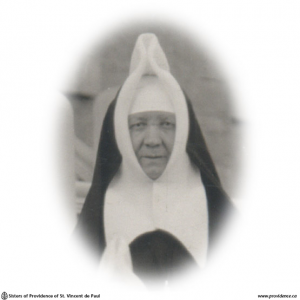 On September 13, 1942, Sister Mary Anthony (Catherine Curran) was called in death at the House of Providence, Kingston.

Practically all of Sister’s religious life was passed in the House of Providence, in the discharge of various assignments. These she earnestly and faithfully fulfilled in the interests of the Community.

Although incapacitated by illness and physical suffering for several years, she happily celebrated the Golden Jubilee of her religious profession in August 1941.

On this momentous occasion, she was the grateful recipient of many favours and special marks of kind consideration from Sisters and friends.

Sister had a weak heart and her condition became gradually worse. Shortly before the end she received the Last Sacraments, and passed peacefully into her home of eternity.