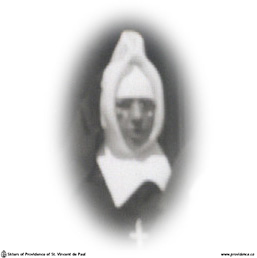 Mary Bernadette Kelly was born in Brockville on January 19, 1893 and baptized eleven days later by Rev. J. J. Collins. She was the eldest of a family of four – two daughters and two sons – of William Kelly and Catherine Farrell.

As a child she and her sister Rhoda during an epidemic of small pox fell victim to the disease and were cared for by the volunteer Sisters from St. Vincent de Paul Hospital. The dedication of the Sisters must have made a lasting impression on the two little girls, as both later joined the Community of the Sisters of Providence. Rhoda entered the novitiate in 1911 and made profession two years afterwards as Sister Mary Matthew.  Bernadette, who had received a business education and had been working in an office, felt called at this time to follow her sister to the convent; but she was advised by her pastor to remain for a few years longer with her parents who would find very painful a second parting after such a short interval. Three years later, in 1916, Mr. and Mrs. Kelly generously made the sacrifice and Bernadette began her novitiate at the House of Providence.

After profession in 1918, now Sister Mary Antoinette, she was assigned to Providence Hospital, Moose Jaw, where she was to remain in charge of the office for seventeen years. In 1935 she was recalled to the East to take over the office, first at St. Vincent de Paul Hospital, Brockville, and later at St. Francis Hospital, Smiths Falls. In 1947 she went to the Father Down Memorial Home, Montreal and remained until 1956. Her next assignment was St. Mary’s Orphanage, Heathfield and she was there until the work with the children was relinquished, and the Villa had to be demolished in 1964. The next six years she spent as librarian and St. Vincent de Paul Hospital, Brockville. In 1970 gradually increasing suffering from arthritis, as well as a weakened heart, obliged her to retire to the Marian Infirmary.

During her six years here, to her suffering was added trouble with her eyes. But she was able to be up in her room every day, her mental faculties remained alert, and she kept up her reading with the aid of a magnifying lens.

On November 16th she complained of chest pains, but the nurses were not unduly alarmed, for a recent examination at the hospital had not disclosed serious trouble, and the prescribed medication was given her. The chaplain, Father Buckley, visited her in the evening and gave her his blessing. At 4 a.m. while Sister M. Delphine, night nurse, was with her she passed away quickly and quietly. The Community Mass at 7:00 a.m. was offered for the repose of her soul.

On the 19th His Grace concelebrated the funeral Mass with Father Omar Desmarais, O.M.I. from Brockville. Monsignor Bernard Walsh, Father Pickett and Father Buckley were present.  For the Gospel His Grace chose the parable of the ten virgins, remarking that there was a parallel in this reading with the call of Sister M. Antoinette; she was awake and ready for the Lord when He came after midnight. Father Desmarais in his homily spoke of Sister’s cheerfulness and sense of humour, which he said was a great help in life where we have so many ups and downs; and he called her sixty-one years of religious life a “credit card to the Master”.

Sister was the last of her immediate family – Sister M. Matthew died in 1965. She is survived by a number of nieces and nephews, including Sister Mary Regina of Heathfield. Sister Mary Regina’s three sisters and a brother with his wife and daughter came from Syracuse from Bathurst, N. B.

A moving tribute to Sister M. Antoinette was the attendance at her funeral of a woman who had been employed as cook at St. Mary’s Orphanage during the years that Sister had charge of the office there. The woman, Mrs. Granger, is in poor health and made an effort to come to Heathfield; she also sent a lovely floral wreath.