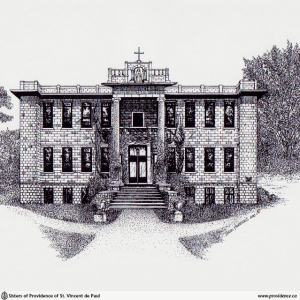 To have many young ladies ask and receive admission into the Novitiate of an order, is always a source of joy and congratulation for its members, for, they feel that after they, themselves, are no longer able for duty, and have passed to their reward, the good work for God and souls will continue to be carried on by able and willing hands. Just how many years in the Master’s vineyard may be allotted to each, we do not know, but we hope and pray that each may persevere fervently and faithfully to the end, and thus receive the promised reward.

In January 6, 1916, we had the pleasure of receiving six young ladies into the Novitiate. One, the subject of our sketch was born in Kitley, April 16, 1896. Before reaching the age of maturity she lost both of her parents by death and her early education and training was cared for by her aunt and her married sister. Happily for her, her early aspirations were toward the convent – the conventual life.

After her entrance as is the custom, Sister was employed at stated hours in the different offices of the house, and being of very gentle, amiable disposition, she was always looked upon with favour.

After her Profession, Dec. 22nd, 1917, she was sent to study by way of preparing later for teaching. At the examinations the next June she succeeded in passing Lower School. In September of that year she in company with four other Sisters was sent to Glen Nevis to continue the work. Towards the close of the year she contracted a cold, which did not seem to leave her. The cough continuing, the Superior, Sister Mary Stanislaus becoming anxious, had her return to Kingston to see a doctor early in February of the New Year.

Upon examination Dr. Phelan found serious trouble, and advised that Sister be kept in bed for a while. Later she was permitted to be up and about her room, or resting on a reclining chair. All the time the disease was making rapid progress, as subsequent events proved. Sister remained cheerful, happy and apparently hopeful of recovery, but the Infirmarian and those about her, seemed to think she realized her condition perfectly from the first. At all events, when mention was made of administering the Last Sacraments, she showed no surprise, but rather manifested delight. She was prepared by Rev. Joseph on July 5th. From that time she grew weaker day by day. On Monday evening Aug. 16th the announcement was made that she was really dying. All the Sisters assembled, and the greater number remained with her until the pure young life took its flight to its God, after midnight Aug. 19, 1919.

The funeral Mass on Aug. 21st. was a Solemn Pontifical Mass by His Grace Most Rev. M.J. Spratt, assisted by Rev. Father Joseph, Father Kehoe, Father Keaney and Father Coyle.

We have prayed for you, little Sister, surely, we may hope, you can now plead powerfully for us.