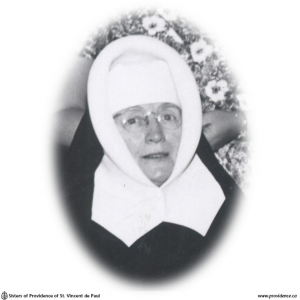 Sister Mary Aurea died early on Tuesday morning, August 2nd in St. Francis General Hospital, Smiths Falls, where she had been a patient for three months, suffering from a serious heart condition.

Sister was the former Mary Loretta Farrell of Stoco, Ontario, her birthplace. Her parents, Joseph Farrell and Rose Anderson of that locality died young leaving three small children, including Mary Loretta, a boy and a girl who predeceased her. Rev. Father O’Rierdon who was then pastor of Stoco, assumed guardianship, and while he lived was a devoted father and friend. His helpful interest was always a subject of gratitude for Sister M. Aurea.

In 1914 she entered the House of Providence Novitiate, Kingston, and made her religious profession in 1916. While capable in various ways and, as said of her, “she could do almost anything,” most of her life was devoted to music when her health permitted. Sister taught in Chesterville, Trenton, Belleville, Glen Nevis and Perth. As local Superior she spent three years in St. Mary’s Home, Edmonton, and six years in St. Peter’s Convent, Trenton. In 1954 she joined the staff of St. John’s Convent, Perth, where she continued as assistant musician, organist, and sacristan until her illness in April last.

Following her death on Tuesday, Sister M. Aurea’s remains were taken to St. John’s Convent.  This arrangement by the Superior, Sister M. Alda, pleased the people of Perth very much and gave them an opportunity of viewing the remains and praying for her. Sister had taught many of their children and was much beloved by her pupils. A manifest proof of the parishioners’ appreciation was the large number of Mass cards received. On Wednesday requiem High Mass was offered by Msgr. Farrell in the parish Church of St. John Baptist for the repose of her soul. After Mass the funeral cortege continued to Kingston, with the remains which were received by the Community at the Mother House, at Heathfield.

A number of cousins and other relatives and friends attended the funeral. Burial took place in St. Mary’s Cemetery, Rev. B.J. Walsh, Rector of St. Mary’s Cathedral, recited the prayers at the grave.