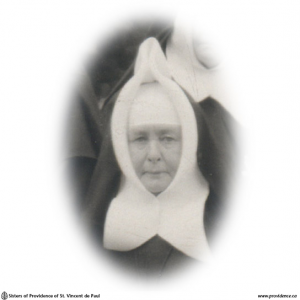 On Tuesday morning, July 27, 1948, Sister Mary Austin died, after a lengthy illness which kept her confined to the infirmary, at the House of Providence, Kingston.

Sister was the former Catherine Mugan, a native of Bothwell, Ont. She entered the Novitiate in Kingston, December 9, 1899. After profession she was sent to St. Vincent de Paul Hospital to study nursing and graduated in 1906, being one of the first graduates of that school of nursing.

She was one of the pioneers of the first mission in the West, in Daysland, Alberta, in 1908. After five years in this mission she was Local Superior of St. Francis General Hospital, Smiths Falls. Later she was named Mistress of Novices, an arduous post which she creditably filled for twelve years. She served on the Council for another period of twelve years and was the first Superior of St. Gregory’s Convent, Picton, which was opened in 1943. In 1945 she returned in delicate health to the House of Providence where she spent her declining years until she died.

Above and beyond this notable, Sister Mary Austin was a faithful religious and believed in giving the best she could to God and that those in her charge should do likewise. With this in view, she was strict and considered perhaps exacting, but she possessed sterling qualities of mind and heart, fitting her admirably for the work in which she was engaged during her religious life.